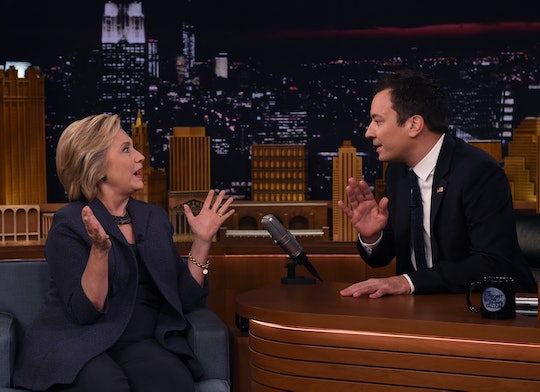 It must be tough to be germaphobic when one is a late night talk show host. Poor Jimmy Fallon must have been perfectly petrified when Democratic presidential candidate Hillary Clinton was a guest on his show earlier this week. As the spin doctors in the Republican party can attest, Clinton has been ill. Not ebola virus ill yet, but ill. So is it understandable that Jimmy Fallon greeted Clinton wearing a surgical mask on his late night talk show, or simply beyond the pale?

Clinton has been struggling with rumors about her health for a few weeks, particularly since she had to leave a Sept 11 event early due to "walking pneumonia", which she had been shrugging off to get on with the business of trying to become the first female President of the United States. In a phone interview on Monday with Anderson Cooper, Clinton said she hadn't considered her pneumonia to be "that big a deal". She canceled a few events over the course of a few days, spoke to a doctor to get on some antibiotics and drank plenty of water. Which has Donald Trump and his supporters shouting from the rooftops that she clearly can never be president on account of presidents don't ever get sick.

So how did Hillary Clinton, also known as the first politician to EVER get sick, react to Fallon wearing a surgical mask to greet her on his show?

She gave him a big old high five.

Fallon was, obviously, making fun of the whole "Clinton is sick and weak and therefore can never lead a country" routine. He welcomed Clinton wearing the surgical mask, and she laughed (by the way, Obama was right when he said Clinton has a great laugh. She totally does). Then, when Clinton hit Fallon up with a high five, he jokingly reached for the hand sanitizer as a "precaution".

During the interview, which will air on The Tonight Show on NBC on Monday, Fallon asked Clinton about her public perception (do we want her to be funny? Serious? It's a guessing game most of the time), and how she will protect the country if she is elected president.

"It's especially tricky for women. It just is. It is a constant balancing act. How do kind of keep the energy and the positive spirit while taking seriously what you need to?"

One positive thing that has come out of the media maelstorm of Clinton daring to get pneumonia when she is expected to be superhuman; at least we're all talking about health care now.