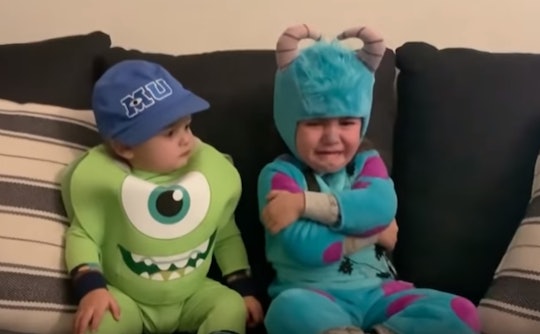 Children are wondrous creatures, really. They put up with us adults all the time, although I suspect they do this simply because of that whole food and shelter business. And how do we grown-up humans repay all of the love and magic and beauty children bring to our lives? With Jimmy Kimmel's annual Halloween prank, of course. It's become a holiday tradition on par with watching Hocus Pocus and trick-or-treating itself, but with a lot more screaming from children lounging around the house in their underwear.

For the past nine years, the comedian and host of Jimmy Kimmel Live! has encouraged parents and caregivers to ruin the first morning in November for children across the country. How does he do this, you ask? Simply by initiating his YouTube challenge aptly titled "Hey Jimmy Kimmel, I Told My Kids I Ate All Their Halloween Candy." As you might have figured out from the title, the entire point of this challenge is to trick little kids into thinking dastardly adults have eaten all of their hard-earned Halloween candy and then they videotape the ensuing meltdown.

The past nine years have seen children screaming in their parents' faces, yes, but also every once in awhile there will be a child who simply accepts their loss of candy as par for the course. These are the ones who give me hope for the future and also break my heart in two.

"This is something I know many people have been looking forward to all year, the results of our annual, beloved tradition," Kimmel explained in the opening monologue. "I'm told that many of the disappointed kids from the first time we did it in 2011 have now blossomed to become fully-grown, disappointed adults."

So how did the kids fare in 2019? Pretty much like the kids in the other eight years. There were some who could not hold onto their chill, perhaps especially since they had just gone out and worked the neighbors in various costumes for their stash of Halloween candy. Like the little girl whose response to having her candy stolen by her parents was simply, "I'm going to call the police."

There were plenty of kids who screamed, naturally, that kind of scream where their jaws looked like they became unhinged and the sounds they made... blood curdling. But my personal favorites were the kids who really tried to reason with their parents. Like this little boy who explained he would be telling on his mother as his sister beats the heck out of her empty plastic pumpkin in the background. He says to his mother, "That's so rude on you!" and reminds her to eat vegetables the next time she's hungry. His older sister is beyond words.

I'm trying to imagine how I would have felt if my mom had done this when I was a kid, but she wasn't very good at pranks so probably I just wouldn't have believed her. As for whether or not any of these kids will trust their parents again, I'm sure they'll move on. They just won't trust Jimmy Kimmel, that's all.