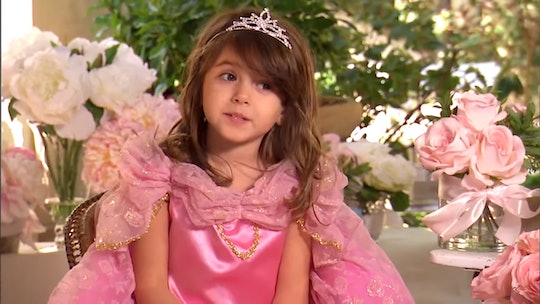 ABC's Jimmy Kimmel Live! aired a parody of The Bachelorette on Tuesday night, and it could have gone one of two ways. Mixing a hookup culture dating show with a literal toddler in a tiara had the potential to turn out creepy and exploitative, or hilarious and adorable. Good news: it was the latter. Jimmy Kimmel’s Baby Bachelorette is actually pretty great. This isn't the late-night host's first turn as a pretend Chris Harrison; Jimmy Kimmel Live! aired a Baby Bachelor series back in 2013 starring Kimmel's own nephew, Wesley, who, according to Kimmel, found true love and is now "engaged to be married in the year 2033."

On "the most dramatic season of The Baby Bachelorette yet," we meet Bianca, a 4-year-old with perfectly side-swept bangs that I am legitimately jealous of. "I'm gonna get married and have a pretty dress and be a princess," Bianca beams. While this first line made me cringe, I quickly learned that Bianca's no brainwashed fairy tale addict; she's just an amazing actress who's clearly in on the joke (which might actually put her ahead of some real Bachelorette contestants). The boys, on the other hand... not so much. More than one runs into the arms of a parent, and they all deliver their lines in a charming amateur style that brings to mind those classic Peanuts holiday specials. These boys are no match for Bianca, romantically or otherwise.

The suitors ages are given in months (ranging from 23 to 50), and just like the real bachelors, their occupations sway from the reasonable (mess maker, train expert) to the absurd (juice mixologist, Captain America). One by one, they tumble out of the limo in their little tuxes, doing their best to embody the personas their parents surely hope they never grow up to be. Arthur, a 45-month-old barista, plays the part of the gimmicky bachelor, arriving with a violin that he has no idea how to play. "I love musicians," Bianca later tells the camera. She's less impressed with Ethan, a 23-month-old hedge fund manager who shows up looking disheveled and chooses to throw rocks rather than meet his potential soul mate. "Seems like he likes rocks more than girls," comments Bianca. Well, to be fair, he is literally a baby. He probably likes rocks more than anything. That's not on you, girl.

The episode wraps up with manufactured drama (just like the grown-up show) between bad boy Alex, a 39-month-old preschool dropout, and sweetheart Manny, a 37-month-old Lego architect. Kimmel, like Saturday Night Live before it, obviously did its homework, as Alex interrupts Manny and Bianca's one-on-one time with the Bachelor/Bachelorette's unofficial catch phrase, "Can I please steal you?" So who did Bianca choose to bestow that First Impression Unicorn on? I'm not telling. Watch the full video to find out, because it's totally worth it. I'm hooked for the whole season.