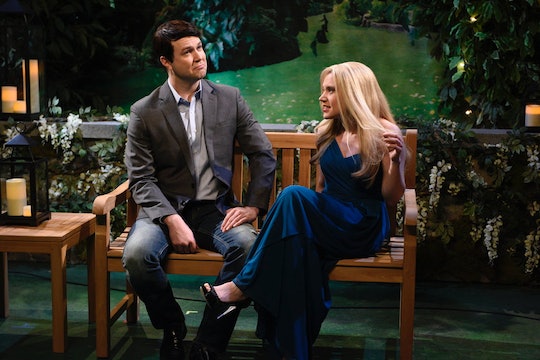 'SNL's Parody Of 'The Bachelor' Nailed All Of The Stereotypes

Say what you will about The Bachelor, but even after twenty seasons, it’s still super addictive to watch. The premise is so outlandish — a group of insanely gorgeous women going on crazy group dates trying to win one man’s affection — that it’s hard to turn away. But it’s also ripe for ridicule, which is why the Bachelor parody on this week’s Saturday Night Live was so great. The SNL version of The Bachelor is Bland Man, about, “one very bland man [and] 25 long-haired women” vying to be his wife. And while it maybe wasn’t quite as funny as I’d hoped it would be (let’s be honest — I mostly just wanted to see Cecily Strong do a straight-up Lace impression), it pretty much nailed a lot of the tropes we see again and again each season, making them seem so blatantly obvious that it’s kind of surprising they hadn’t already done this spoof before.

In Bland Man, Taran Killam plays Dan, who is from, “Chicago or Denver or something,” (seriously, why are they always from Chicago or Denver?). What do we need to know about Dan? Well, he has “blue eyes, brown hair and a gray shirt.” ‘Nuff said.

The sketch sees Dan on a bench talking to a revolving door of bachelorettes one-on-one, which everyone knows is basically the main goal for each of the ladies during a group date or before an evening rose ceremony. They each start their conversation with Dan by saying, “I like this,” (naturally), only to eventually be interrupted by another woman who asks — what else? — “um, can I steal him for a second?”

Kate McKinnon swoops in as the girl who finds everything Dan says super intriguing and hilarious, and host Ronda Rousey learns she has so much in common with Dan, since they both think the moon and the sun “are so nice.” Aidy Bryant needs to “be totally honest,” and tell Dan about her son and five daughters who “can’t wait for [him] to be their daddy,” and Sasheer Zamata is “the black one,” who Dan tries to quickly usher out, before he agrees to let her stay another week because she has a sad backstory.

Ultimately, Selena Gomez is the lucky (?) lady to win Dan’s heart. But not before Cecily Strong confronts Dan about her “deep emotional problems,” and how “all the girls hate [her] just because [she’s] so mean to them.”

Bland Man makes light of the sheer ridiculousness of some aspects of the show (why are the girls pretty much always white? Why are they fighting so hard for a guy who’s usually pretty unremarkable? And why are they always trying to “steal him for a second”?!), and in that sense, it was right on the money. But am I the only one who was hoping to see a straight up spoof on this season’s cast? I mean, there are so many options! Olivia! The twins! The Chicken Enthusiast from the first episode! And, most importantly, Cecily Strong as Lace!

Think about it, SNL. It’ll be amazing.