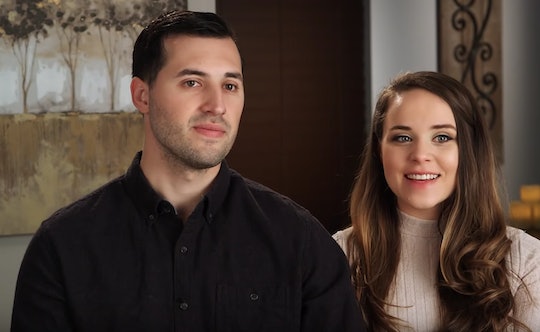 When Jinger Duggar was first spotted wearing pants in 2017, fans of her supersized family were a little confused by her fashion choice. Watching 19 Kids & Counting and Counting On over the years, viewers were led to believe that the girls in the family were only allowed to wear modest skirts and long dresses. But things change and Jinger Duggar wearing pants isn't as controversial as some people may have thought before.

Fans who have been following the Duggars for long enough know that the women in the family aren't often pictured wearing pants. And that was a decision made by parents Jim Bob and Michelle Duggar. In a now deleted 2013 blog post on TLC's website, Michelle explained why she dresses herself (and her daughters) in modest dresses and skirts, according to In Touch Weekly. "As we studied as a family, we found we come up with our idea of what we thought modesty was, but we really wanted to see what the scriptures said about it," Michelle wrote at the time. "Our interpretation was that from the neck down to the knee should be covered. By keeping those private areas covered, there's not any 'defrauding' going on."

But, of course, times change and people's opinions differ. And Michelle and Jim Bob are now OK with Jinger wearing pants, according to The Inquisitr. During an episode of the family's TLC reality show, Counting On, on Oct. 22, Jinger was filmed going on a hike with her husband and their daughter, in their new home of Los Angeles, California. Jinger said she chose to wear pants for the activity, just so she would be comfortable, according to In Touch Weekly. But she knew she might get some backlash for this decision, especially from her parents.

"We had conversations before I started wearing pants and just shared my heart with them and where I saw the Lord leading me," Jinger said in the episode, according to OK! Magazine. "I was really grateful for their response."

Their response? They trust their kids to "walk with the Lord" and "maintain modesty", according to Duggar Family Blog. "My parents always raised us to honor Christ in everything that we do," Jinger added. "That's where the Lord's led me as of now."

Michelle then hopped on the screen to talk about respecting Jinger's decision to wear pants, stating that she dressed her daughters in skirts and dresses because of her "own personal convictions." "It's OK that my kids may have different convictions than me," she said. "I know that He's leading them. And that's the most important thing is their walk, their relationship with God."

So there you have it — Michelle is OK with her daughters choosing to wear pants because she trusts them and their relationship with God. Jinger is 25 years old now, a mother to her daughter, and is very capable of making her own decisions when it comes down to choosing what she wants to wear. Her parents know this, so maybe wearing pants was never that much of a big deal in the first place.

This isn't the first time the "rules" have changed in the Duggar household. Duggar fans had been previously led to believe that only siblings who were married or courting were allowed to have their own Instagram accounts, according to CheatSheet. But in September 2018, Jessa Duggar set those rumors straight (in an Instagram comment) once and for all. "It's not a rule, just a coincidence," she wrote.

Whether this is a sign of changing times or the Duggar kids growing up, one thing is certain: any and all drama surrounding Jinger's pants should officially come to an end.