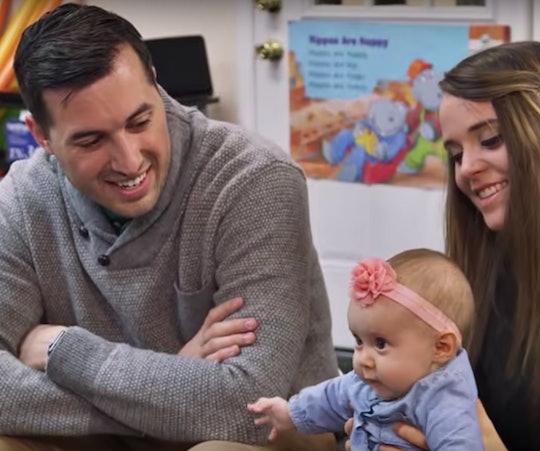 My kids don't look like me. I think they're pretty happy about it since they're men with beards and such but I wouldn't mind it if at least one person thought one of my sons looked a little like me. Maybe it's just the man/woman thing that's standing in the way. Maybe if people saw baby pictures of me beside baby pictures of my kids they would be able to see that some of my genes are floating around in there somewhere. This is exactly what Jinger Duggar did recently. Jinger's baby photos have Counting On fans convinced baby Felicity is her mini-me, so I guess we can put that debate to rest right now.

Jinger and her husband Jeremy Vuolo are parents to 1-year-old daughter Felicity. As everyone knows, Jinger is a member of the famous Duggar family from TLC's 19 Kids & Counting fame, although she and Jeremy have managed to attain a level of celebrity in their own right just by living their best lives all the time. The couple have recently moved from Laredo, Texas to Los Angeles, California while Jeremy goes back to school, and Jinger is using the opportunity to really spread her wings as a gifted photographer.

Especially when it comes to taking photos of her daughter Felicity.

Jinger recently took to her Instagram Story to ask her fans a serious question; Who does Felicity look like? Some of the other Duggar offspring look so much like one parent (I'm looking at you Austin Forsyth and son Gideon) that it's a no-brainer. But so far Felicity has been a bit of a mystery.

Until now, that is.

On Thursday Jinger shared a series of side-by-side photos of both herself and Jeremy through various stages of babyhood, even including one of herself as a toddler which tells me she is trying to tip the voting scale in her own favor. She then shared two photos, one of herself as a baby and one of Jeremy as a baby, above two photos of Felicity and asked fans to vote.

The odds were definitely in her favor.

Jeremy commented on the photo at the time, as per Cheat Sheet:

That's the thing about babies; they are changing constantly. Every time you think you know who they look like their faces morph into someone else and the process starts all over again.

That being said, I think Felicity looks more like Jinger than Jeremy. Maybe because I feel like she wants it more, what with all the work she put in on the Instagram vote and everything. Just give it to her, won't you?