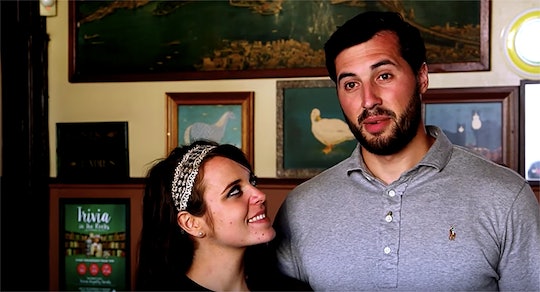 Get Excited, Because Jeremy Vuolo Just Revealed Baby Felicity Is Getting Her Own TLC Special

Jinger Duggar and her husband, Jeremy Vuolo, welcomed their first daughter into the world on July 19. The new parents named the adorable little girl Felicity, and Counting On fans have been obsessed with her ever since. From updates about Felicity's first few weeks of life (the couple shared their first family video on Monday) to sharing details about her birth, it's no secret viewers appreciate Duggar and Vuolo's transparency with their firstborn. But just when you thought the parents couldn't get any more generous with the updates, the new dad revealed that baby Felicity will have her own TLC special. Talk about an exciting development, right?

Although Duggar and Vuolo have every right in the world to keep Felicity under wraps, it's nice to know they're willing to share her life with fans. Viewers have followed Duggar ever since 19 Kids & Counting first premiered in September 2008, after all, and a lot of people are invested in her journey. Duggar's story has come full circle, so to speak.

The good news is Vuolo is as open as Duggar when it comes to Counting On and Felicity. Not only did Vuolo plug the new season of the show on Saturday, but he also revealed an important detail about Felicity's birth special. Vuolo dropped the exciting news on Twitter when a fan inquired if viewers will get to "meet" baby Felicity anytime soon.

"Will there be a special to meet felicity I love u and jinger u guys are my favorites," the curious person wrote. "'Im proud u guys waited and settled in before having a baby."

Well, it looks like today is your lucky day Counting On fans, because there will be a special about Felicity. Hip hip hooray.

"There will be. I'm not sure it has an air-date but it should be soon!" Vuolo responded to the question.

"Yay! So excited! Love you all and your heart for God and people," someone penned on Twitter.

One person chimed in: "I can not wait."

So, when is the special likely to air?Counting On's timeline of episodes can be confusing (the Season 7 premiere on Monday followed Kendra Caldwell and Joseph Duggar on their honeymoon, despite the fact their wedding took place in September 2017), and TLC often shows events out of order. Take Josiah Duggar and Lauren Swanson's wedding, for instance. TLC aired the wedding special in July, despite the fact it won't be featured on Counting On until next season or so.

If you take into account the show's strange episode schedule, then it's possible the birth special will air within the next few weeks. Want proof? Caldwell's birth special aired on TLCme Now (TLC's website featuring the latest videos) at the end of June, just a few short weeks after she welcomed her son, Garrett, into the world. If Duggar's birth special follows this schedule, it could hit TLCme as early as next week.

Keep in mind, however, that these specials air on TLCme for a brief period of time before they become subscriber only content. If you miss this window, you'll have to wait a few days until it airs on TLC's channel. Garrett's birth special, for example, hit TLCme on June 29, but it didn't air on TLC until July 6. Translation: pay close attention to TLCme in the coming weeks.

Although the premiere date of Felicity's special is TBD, it's obvious fans couldn't be more excited for it to air. People can't get enough of Duggar and Vuolo's little girl, to say the least, and it's heartwarming to see.