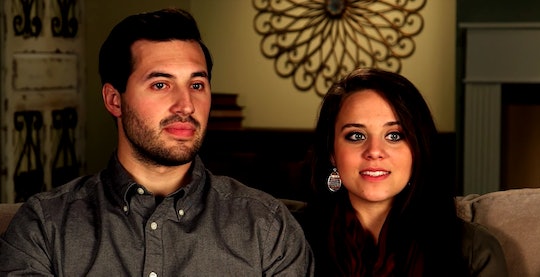 Whenever Jinger Duggar posts a photo of her daughter, Felicity — whom she shares with her husband, Jeremy Vuolo — it's always sweet and exciting to see. So when Duggar shared a new photo of her baby girl on Sunday, fans were delighted to get another glimpse of their adorable little daughter. But because it's the internet, of course some fans felt the need to chime in with some unnecessary commentary. In fact, Jinger Duggar's new photo of baby Felicity attracted some pretty ridiculous criticism.

Being mom-shamed is, sadly, just one of those things new moms — especially celebs — face far too often. And Duggar — who gave birth to Felicity in mid-July, according to Us Weekly — has faced a lot in her short time as a mom. And people were quick to criticize Duggar on Instagram for her most recent photo of Felicity.

On Sunday, Duggar shared the sweetest photo of her daughter sleeping in her bassinet. In the photo, Felicity can be seen sleeping soundly wearing a pink dress, floral headband, mittens, and the cutest blanket with pink elephants. To anyone else, the photo is a super sweet update about her adorable daughter. But others took the opportunity to call Duggar out for her decision to put mittens on her baby daughter — and it seems that it was bad enough to make Duggar disable the comments on the photo.

Mittens are typically worn by babies during the first few weeks of life to keep them from scratching their face, according to the American Academy of Pediatrics. And for some parents, mittens are great to help prevent kids from scratching their own face with their growing fingernails. Some do think, however, that baby mittens aren't necessary, but that's a decision a parent and their doctor can choose to make.

Although the comments section on the photo has since been disabled, some previous comments were loaded with criticism about Duggar's outfit choice for her daughter. "Those mitts are so stupid," one commenter wrote. "They need to self soothe and they can't with those mitts...get them off. They aren't going to take their eyes out."

"Free the hands!" another commenter exclaimed. "Better for her development."

"Can't babies suck on their hands anymore?" another commenter asked.

But for every commenter who chose to voice their opinion about Duggar's choice to use mittens, there were just as many fans to come to her defense.

"For goodness sakes, it's her baby," one commenter wrote. "If she wants to put gloves on her hands, it's entirely her choice. Geez."

"I used these mittens, too, with my three children," another commenter offered. "They helped so much! Love this little one."

"Support one another's decisions," another commenter added. "Gloves or no gloves, it's a personal choice."

But the criticism must have been enough for Duggar, leading her to remove the comments from the photo (and prevent anyone else from commenting on it, too) three hours after she originally made the post.

Like Duggar's defenders stated, the decision to put mittens on babies is a personal choice with some pros and cons that parents will have to consider. For instance, Massachusetts pediatrician Dr. David Geller told Baby Center that he doesn't recommend mittens on babies. "Babies need to feel and explore things with their fingers," Geller said. "It's an important developmental process." And some doctors recommend trimming babies nails while they're young to eliminate the need for mittens altogether, according to the American Academy of Pediatrics.

While it's not clear why Duggar uses mittens with Felicity, the National Sleep Foundation says "soft mittens" can help remove the danger of a newborn scratching themselves. So, basically, parents may be divided on whether or not baby mittens should be used, and if they're on the fence, parents should check with their pediatrician, and not online critics.

At the end of the day, though, it's always great to see baby Felicity and it's safe to say she's getting cuter by the day — mittens or no mittens.