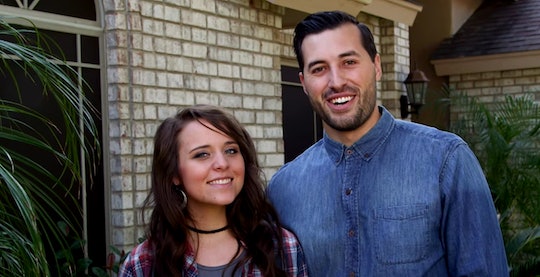 For longtime followers of the Duggar family, the TLC series Counting On is a surreal look into the lives of Michelle and Jim Bob Duggar's adult children. Not only have a fair amount of them come of age, but it seems like every time we turn around, another one is starting a courtship, getting married, or starting a family of their own. After getting to know them through the 19 Kids & Counting years, it's hard to believe Jill, Jessa, Jinger, Joseph, and Joy-Anna are all parents. And thanks to social media, fans are able to keep up with the Duggars' growing families like never before. And Jinger Duggar's photo of baby Felicity at 3 weeks old is honestly so adorable, but the new mom isn't looking for comments on the sweet snap of her baby girl.

On Monday, Jinger took to Instagram to share with her followers a precious shot of her newborn peacefully snoozing in her car seat. The new mom captioned the photo fittingly with an emoji with heart eyes, along with the hashtags #felicitynicolevuolo and #3.5weeks. The sweet moment quickly attracted tens of thousands of likes, and unsurprisingly so. But it's what was missing about the post that stood out the most: A total lack of comments.

It seems as though Jinger has shut off the commenting function on this particular post. So instead of a flood of, "OMG, so cute!" and "She's soooo precious!" there was nothing but empty, white space under the caption.

By contrast, a photo posted on Friday of Felicity — in which she appears to be smiling in her sleep, according to People — attracted more than 1,500 comments. So Counting On fans are probably wondering: What happened?

Perhaps Jinger was just getting tired of trolls slamming her family, unprovoked, in the comments section of photos of her daughter. Like this doozy: "Why doesn't Jinger have a job? Not all women can just lay on their back to get pregnant and mooch off men for money." Yikes. How anyone's mind jumped to Jinger's lack of outside-the-home employment after looking at that sweet baby is beyond my comprehension.

On another post, some commenters voiced their opinions about how Jinger ended up giving birth. An Instagram post promoting Felicity's birth special prompted one particularly grouchy follower to write, "I am disappointed you didn't have a homebirth and you allowed pitocin and an epidural to happen if you do the research those drugs are not very safe thank God you didn't end up with a c- section as those drugs can lead to that happening." Whoa, whoa. The last time I checked, Jinger was the one in charge of her birth plan — and it didn't require approval from an internet stranger.

As revealed in a two-part special, Jinger's midwife was actually the one who suggested she consider inducing labor at a hospital. "Based on the family history, some of the sisters have had a little bit of a harder time with bigger babies," Jinger's midwife explained. "Jinger and Jeremy and I have talked at length about trying to see if we can keep this baby's size a little bit smaller and maybe seeing if this baby could come closer to the due date, instead of going a week or two over, which is typical for the Duggar women." Jinger's older sister, Jessa Seewald, also pointed out that so far, the Duggar sisters had all had 9- or 10-pound first babies. (Joy-Anna Forsyth ended up delivering a 10 pound, 3 ounce baby boy in February, as Us Weekly reported.)

Ultimately, Jinger did receive pitocin at the hospital to induce labor — and then an epidural when she didn't progress as her medical team had hoped, as she shared in her birth special. After the epidural was placed and Jinger had a chance to rest, however, she was fully dilated and able to start pushing a short while later. It took just 30 minutes of pushing before Felicity was born on July 19 at 8 pounds, 3 ounces, Entertainment Tonight reported.

It's worth noting that if you scroll through the comments sections of Jinger's previous Instagram posts, the positive messages far outweigh the negative ones. (Then again, perhaps she has been deleting the particularly nasty ones.) Still, the least of Jinger's worries right should be hateful comments from trolls. So it's completely understandable that she would want to eliminate the capability altogether.

It's hard to say whether comments will be shut off permanently on Jinger's future posts from here on out, but I wouldn't blame her in the least if they were.