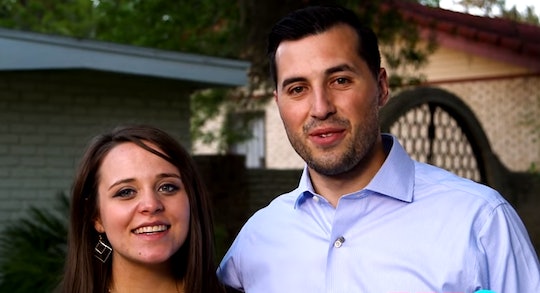 Jinger and Jeremy Vuolo have been parents for just under a month, and already they seem to be taking their new life in stride. The Counting On reality stars had some significant help when they first welcomed baby girl Felicity Nicole back on July 19, but these days they are settling in to life as a new family of three. And it looks like they couldn't be happier about it. Jinger Vuolo's latest pic of baby Felicity doesn't just show off her well-established talents as a photographer; it shows she is loving her life as a new mom.

After Jinger Duggar married pastor Jeremy Vuolo in November 2016, the couple settled in his hometown of Laredo, Texas. Which means Jinger is the only member of the massive Duggar clan of 19 kids to move away from the family compound in Tontitown, Arkansas. While the separation from her family, and perhaps especially the sisters she has always been close to, was probably difficult at first, she seems to have coped nicely. Maybe because she and husband Jeremy appear to be a pretty solid team as a couple. And now that their parents to baby girl Felicity, they're more than just a strong partnership; they're devoted parents who are apparently "so in love with this little doll," as Jinger captioned this photo on Instagram on Friday.

Looking at this sweet, smiling picture of the 3-week-old baby girl, it's hard to imagine that so little time has passed since her birth. And it looks like her mom has moved on from her difficult bout of nerves over delivering Felicity in July. She told Us Weekly that she was nervous about giving birth after having heard so many stories from her sisters about the pain:

I had heard so much about what it would feel like, the kind of pain I would experience and how difficult it would be, and it made me nervous. But when the time came, I felt like God gave the grace to cope.

It probably helped to have sisters Janna and Jessa arrive with mom Michelle Duggar travel from Arkansas to be on hand for the delivery, as Jinger told the news outlet:

Everyone told me giving birth was like running a marathon but until I experienced it, I really did not know what to expect,” she says. “But I have been so thankful to have so much great help around me, giving me time to rest and recover.

Now that the rest of the Duggar clan has gone back home, Jinger and Jeremy are back to being a team of two. And the new dad is loving it. Sure, he's made a few jokes on Instagram about missing sleep and even wrote a funny little ode to coffee (because he might be the funniest member of the family, to be honest), but check out this picture of him working at the computer with his baby girl in his lap. That's one seriously happy man.

Jinger and Jeremy have a bit of a reputation for being the rebels of the Duggar clan, simply by living their lives according to their own rules. They spent their first year as a newly married couple traveling and getting accustomed to life together instead of having babies straight away. They live in Texas. Jinger wears pants sometimes. Instead of simply being an extension of the Duggar family, they are truly the Vuolos. And it's nice to see that they are adjusting to parenting with the same spirit of working together. Taking their time to fall in love with their daughter, and decide how to raise her according to their own rules.