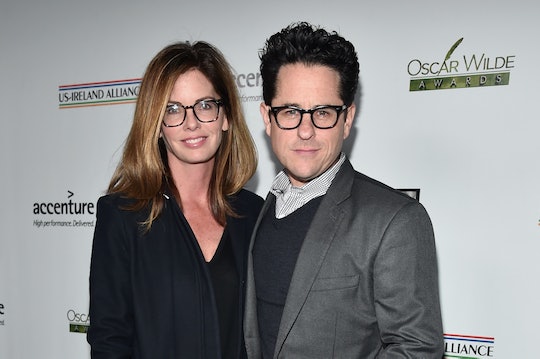 Is there anything J.J. Abrams can't do? From changing the face of television to schooling all other directors on how to do a classy sci-fi reboot to his insanely fabulous eyewear, he is the Nerd King to all of us fellow nerds. And why do we all worship at the altar of Abrams? Because he gets it; the way the world is meant to be. And the most recent example is Abrams' plans to add an openly gay character to the Star Wars franchise. And the best part? He announced it with his particular brand of incredulity that might make the haters feel ashamed for hating.

“To me the fun of Star Wars is exploring the possibilities," he told reporters at the US-Ireland Alliance Oscar Wilde Awards on Thursday, according to The Daily Beast. "So it seems insanely narrow minded to say that there wouldn’t be a homosexual character in that world.”

Of course, this isn't the first time Abrams has made groundbreaking changes to the beloved Star Wars galaxy. Though it might be hard to believe, some fans actually railed against the director when he announced two of the stars of the movie Star Wars Episode VII: The Force Awakens would be a girl and a black man. Gasp! There was even a #BoycottStarWarsVII movement that, and correct me if I'm wrong here, might have been an epic fail. As of last month, Star Wars VII: The Force Awakens, brought in just over two billion dollars. So... yeah.

And what are people saying about this latest development? Will there be a second attempt to boycott Star Wars Episode VIII? Will the internet become plagued with homophobic rhetoric?

Some fans are even speculating which characters might be gay, and putting in requests of their own.

And then, naturally, there are a few haters out there.

The haters this time around are few and far between. And they seem sort of halfhearted about the whole scene. Possibly because the announcement was met with a general feeling of, "Well, of course." and followed quickly with, "OK cool. So here is who we want to be gay, please."

Our world is very different from the one that saw the original Star Wars back in 1977. The idea of a gay character back then would have been revolutionary. And, I'm afraid to say, might have been a tough sell. Not anymore.

I like to think J.K. Rowling, author of the wildly popular Harry Potter series, cracked the door open just a smidge when she announced in 2007 that Albus Dumbledore, wise and cleaver headmastar of Hogwarts School, was gay. Not openly gay, mind you. But gay nonetheless. And when a fan asked Rowling about Dumbledore back in 2013 on Twitter, this was her awesome response:

So there you have it. Gay people get to live in all of our alternate universes, just like everyone else.

And I, for one, am dying to see #PoeFinn happen. I bow down to you, King Abrams.