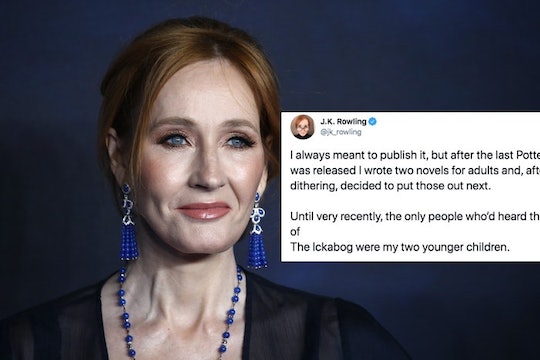 J.K. Rowling Is Publishing A Children's Book Called 'The Ickabog' Online For Free

Millions of people probably felt like they had a giant wizard-shaped hole that would never be filled when they finished reading the final Harry Potter book. It wasn't just the characters we all came to love, but also the way they were written. Warm, sweet, engrossing and OK, spellbinding. Well, good news magic fans: J.K. Rowling has published a free children's book online. What's more, she's hoping for a little reader participation.

I should note before we go any further that Rowling's new book has nothing to do with the world of Harry Potter. Instead, the author has decided to publish a fairytale called The Ickabog she first began writing over a decade ago for her own children, as she explained in a series of tweets on Tuesday.

Rowling explained on her website that she wrote The Ickabog — a fairytale about truth and the abuse of power — between writing the entire Harry Potter series with the intention of publishing it after Harry Potter & The Deathly Hallows was released. Instead, she worked on writing adult novels for a few years, and The Ickabog languished away unread by anyone outside of Rowling's own family. "Over time I came to think of The Ickabog as just for my family," she wrote in a tweet. "The manuscript went up into the attic, where it remained until a few weeks ago."

And on Tuesday, Rowling released the first two chapters of The Ickabog for free on the book's website and will continue to release a chapter or two every weekday until July 10.

Perhaps even better than a new free book for kids from Rowling is the chance to actually help illustrate it. Every time a new chapter is uploaded, Rowling herself will make suggestions for what kids between the ages of 7 and 12 might like to draw to go along with that chapter. Parents and guardians can then submit the drawings to the book publisher to be potentially appear in the physical copy of The Ickabog when it is released in November.

The competition is open to kids from the UK, Ireland, Australia, New Zealand, India, the U.S. and Canada, but American kids who want to their illustrations entered can have their adults do so here.

The actual impetus behind getting this new book ready for release in May online was "so children on lockdown, or even those back at school during these strange, unsettling times, can read it or have it read to them," as Rowling explained on Twitter.

Parents and kids will not be required to register on The Ickabog's website, simply just click here and start reading the first two chapters already released, King Fred The Fearless and The Ickabog. New chapters will be released every weekday after 3 p.m. Western European Time.

It has been almost 13 years since Rowling released her last children's book. A long wait to be sure, and The Ickabog could not have come at a better time.