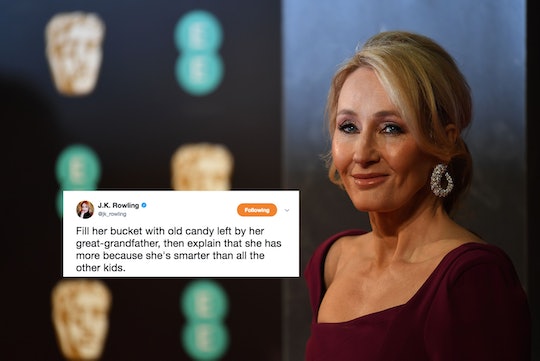 There's simply no disputing that J.K. Rowling is the Queen of Halloween, in my opinion. The Harry Potter author not only created characters who continue to inspire kids' costumes around the world, but anyone who has read her book knows she gets it. The spirit of Halloween. And anyone who follows her Twitter feed, knows that's not all this whip-smart writer gets... she knows how to give a truly perfect smack down, too. Rowling's response to Donald Trump Jr. taking his daughter's Halloween candy to make a point about socialism is perfect for exactly those reasons.

On Tuesday, Trump Jr. shared a truly misguided tweet about taking his daughter Chloe's Halloween candy. Not as a practical joke, a la Jimmy Kimmel's videos of parents saying they took their kids' candy and then recording their kids' hilarious reactions. Trump's tweet was a dig against the concept of social welfare, though he preferred to call it "socialism." (Note: Social welfare is not exactly socialism, though many think it's a socialist policy.) His tweet was a reminder that his incredibly privileged daughter, a young child born into enormous wealth, is somehow owed every last candy she *earned* trick-or-treating on Tuesday, and that sharing any of that candy would be beneath her. His response acts as though it would be a terrible joke for her to be expected to share any of her candy with someone less fortunate (which, as a mini Trump, would be just about anyone she met).

Trump Jr. shared a picture of his admittedly adorable daughter holding out her little pumpkin with the caption:

I'm going to take half of Chloe's candy tonight and give it to some kid who sat at home. It's never to early to teach her about socialism.

Trump Jr. critics quickly took to Twitter to call him out for his misinformed lesson on what he seems to believe socialism really means. In this case, he seems to believe socialism looks like children willfully avoiding trick-or-treating — which is basically one of the best things about childhood ever — in the hopes that some hardworking child might go out and do all the "work" for them, aka, going door-to-door to collect free candy from people. As the responses started rolling in, J.K. Rowling's response was perhaps the most salient of them all. She had an alternate idea for Chloe, the child being used by her father as a tool to misinform. Rowling wrote:

Fill her bucket with old candy left by her great-grandfather, then explain that she has more because she's smarter than all the other kids.

Rowling's tweet was a much-needed reminder that President Donald Trump was born into a wealthy family; his father Fred Trump was a real estate magnate himself, and offered his son a "small business loan" of $14 million to start his own business, according to Politico. As Rowling pointed out, Chloe's metaphorical "bucket" was already overflowing before she even started trick-or-treating. And perhaps it wouldn't be the worst idea in the world for Trump Jr. to teach his daughter about empathy rather than socialism. Although it appears he doesn't know much about either subject, as evidenced by his Halloween tweet.

Rowling wasn't the only one to call out Trump Jr., who is presently running his father's company (because nepotism is just so much better than socialism, obviously), for his lack of empathy. Betsy Stevenson, a former member of the President's Council of Economic Advisers, tweeted her own lesson on the true meaning of sharing one's Halloween candy. A lesson in compassion and generosity.

Trump Jr. might want to read some of the responses to his recent Twitter gaffe to learn some much-needed lessons of his own. As for little Chloe... I hope she had a great Halloween.

I hope she got a bunch of candy, and that she spent time with friends, and that she has no idea that she was being used as something of a political pawn on her father's Twitter page.