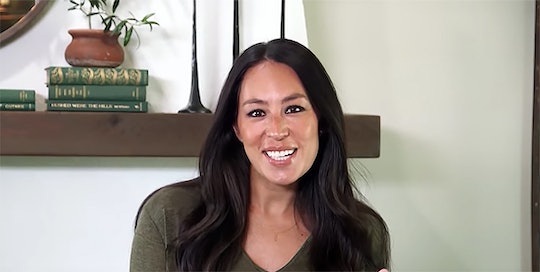 Ever since Joanna Gaines confirmed her fifth pregnancy in January, she has remained relatively quiet about her latest addition. With the exception of a sweet sex reveal in March (it's a boy) and Gaines showcasing her bump on an episode of Fixer Upper, it looks like she is making an effort to keep this pregnancy mostly under wraps. Although Gaines is completely entitled to this privacy, fans can't help but want to know more about this special time in her life. And luckily for Gaines' most dedicated supporters, she broke her silence on Sunday to share a bit of info about how her children are handling her baby news. As it turns out, Joanna Gaines' kids are incredibly excited about her pregnancy, and the reason why is so sweet.

Gaines and her husband, Chip Gaines, are already parents to Emmie, 8, Duke, 9, Ella, 11, and Drake, 14. As you can see, Chip and Joanna's children are all close in age, which means that they probably have no recollection of their mom being pregnant. So, one can imagine the kids were *thrilled* when Gaines broke the news that another sibling is on the way. In fact, Gaines confirmed this theory when she opened up about the "best" aspect of her pregnancy.

“The best thing about all of this is the excitement that my kids have shown for their new baby brother," Gaines revealed on Sunday, according to an exclusive interview with Life & Style. Since I had our first four babies so close to one another, none of them actually remember me being pregnant. They love my growing belly (and boy is it growing), and they cannot wait to meet him.”

Does it get any cuter than this? It's truly heartwarming that Gaines' kids are amped to take part in this pregnancy. From giving their two cents on their brother's name (there's a good chance it will start with a "D") to watching Gaines' bump grow, there will be no shortage of special moments for Emmie, Duke, Ella, and Drake to enjoy.

Of course, it should come as no surprise to Fixer Upper fans that Gaines' kiddos are really happy about this pregnancy. In June 2017, Gaines shared that her kids were "always asking" her for another sibling. Gaines revealed at the time, according to People:

Chip thinks we’re done. I would love to have another baby — or twins! The kids are always asking me, ‘Mom, can you have another baby? Emmie has never really wanted one, and now she’s like, ‘Okay. I want a brother or sister.' So I’m thinking that might be a sign.

Hopefully, fans will understand how the family's excitement probably plays a role in Gaines' extra need for privacy during this time. In an effort to make this pregnancy as special as they can for their children, Gaines and Chip are probably making a conscious effort to minimize the amount of details they share with the press and fans. The more people know, the less fun it is for the kids, right?

So, it makes sense that the couple is opting for less public projects as Gaines' pregnancy progresses. Now that Fixer Upper is done, Gaines is gearing up to a release a cookbook (super low-key) and she also plays a pivotal role in the duo's new restaurant, Magnolia Table. In short, it seems like Gaines and Chip are slowly transitioning from a life in front of the cameras to a more chill existence working at home.

Although this might be disappointing news to Gaines' fans, it sounds like this new life is best for her kids. “It is crazy when I look at these kids, they’re growing so fast,” Gaines said about the end of Fixer Upper, according to People. “So for us, whether it’s just ice cream or playing games, we gotta make those moments count.”

On that note, here's to Gaines and her family enjoying the last moments of her pregnancy. This is undoubtedly a special time for the Gaineses, and they deserve to make these special memories in private.