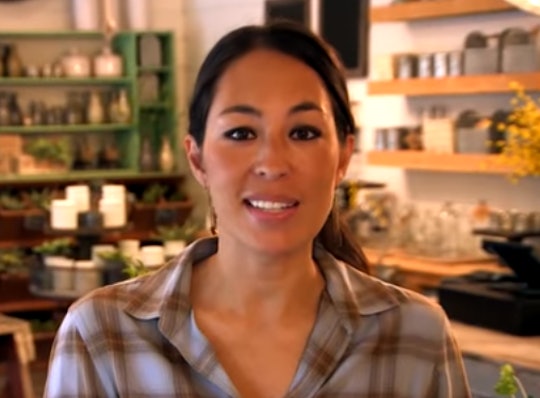 Joanna Gaines seems to be having what I like to call the perfect summer. She's just welcomed a new baby boy, son Crew, which is always exciting. On top of that, she's getting to spend time on her beloved farm in Waco, Texas, bonding with her other four kids and settling in to a more peaceful routine than the Fixer Upper star has probably enjoyed for a long time. And she's not the only one who seems to be fully loving this time together as a family. Joanna Gaines' new picture of baby Crew is extra special for an important reason; the shot was apparently taken by her 8-year-old daughter, Emmie Kay.

Crew Gaines was born on June 23 in Waco, joining siblings (12-year-old Drake, 11-year-old Ella, 9-year-old Duke, and 8-year-old Emmie Kay) and his proud parents, Joanna and Chip Gaines. The 40-year-old mom of four was surprised to find she was pregnant, as the cookbook author told People back in May, and the news came after the couple had just announced they would be ending their time as hosts of HGTV's Fixer Upper; “When we were done, we had no plan like, ‘Let’s have baby No. 5.' It was a total surprise. But when we found out, it solidified that it was the right decision to leave when we did.”

And now that Crew Gaines has arrived, with his full head of dark hair and sweet little face, his mom has one thing on her mind, according to the caption she attached to her recent Instagram post. "Snuggle time."

Joanna also added the hashtags #emmiekay and #babycrew. Which appears to point to the possibility that her youngest daughter was the brilliant photographer behind this picture. This makes me happy for the family. After all, Emmie Kay has been the baby of the Gaines crew (no pun intended) for a full eight years, so welcoming a new baby brother could have potentially caused some friction.

However, it doesn't seem to be. In fact, when Joanna was in labor for little Crew a family friend took a picture of her four older kids anxiously waiting outside the hospital room with their ears pressed to the door, excited for news of their new baby brother.

The reality that welcoming a fifth baby after eight years would change the family dynamic was not lost on Joanna Gaines, obviously. She spoke to People in May concerning her feelings of becoming a mom for the fifth time at 40, but she was making the choice to keep things positive:

I know it's incredibly hip and popular to hate on celebrities, to assume that they aren't what they seem or they're just trying to build their brand on whatever. But here is what I see when I see Joanna and Chip Gaines with their kids; they're just a family who loves each other. They're doing the best they can, sort of like we all are, and they're trying to build something sustainable at their farm. Relationships not just with their kids, but between all the siblings.

And in my opinion, they look like they're nailing it.