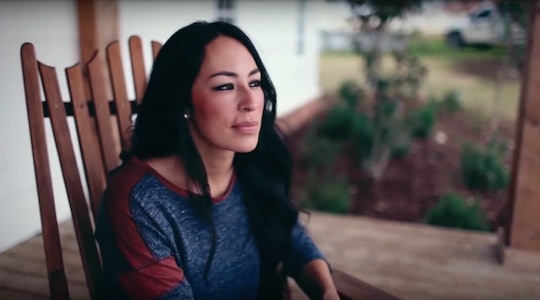 Even the busiest of lives slow down a little when babies come into the picture. At baby number five, one celeb mom knows just how precious time is when your babies are tiny and she's not letting it slip by. In fact, Joanna Gaines' newest photo of baby Crew is proof that she's scheduling in time for cuddles, even while her life grows increasingly busy.

On Monday, Joanna posted a photo to her Instagram showing her cuddled up in bed with her son Crew, who is now 4 months old. “Today’s been a ‘cancel all your meetings and stay in your sweats’ kinda day,” she captioned the photo. Joanna also posted a photo to her Instagram Story that gave a full view of Crew's sweet little face mid-laugh. “Haven’t moved from this spot all day and I’m just fine with that,” she wrote.

Chip and Joanna Gaines have blessed the world with quite a few peeks at their littlest little of late. While appearing on the TODAY show, the duo brought Crew on camera to meet the show's hosts, granted he slept through his talk show debut. The former Fixer Upper stars' other four children — Drake, Ella Rose, Duke, and Emmie Kay — captured hearts all over the world as they participated in their parents' popular TV show. With their parents having revealed that TV hasn't seen the last of them yet, fans can expect to watch Chip and Jo's "babies" grow up.

Chip and Joanna recently announced that they will be making a return to television in the near future, but this time with something more than just a TV show. The dynamic duo took a break from TV following the conclusion of filming their fifth season of Fixer Upper. As Joanna explained on their official Magnolia site, it was out of a desire to focus on what matters:

This is just us recognizing that we need to catch our breath for a moment. Our plan is to take this time to shore up and strengthen the spots that are weak, rest the places that are tired and give lots of love and attention to both our family and our businesses.

That time off didn't last too long though, as Chip spilled the beans about their next big project while appearing on The Tonight Show with Jimmy Fallon. They will have their own network under the Discovery umbrella, according to E! News. "You're gonna get to see the kids grow up," Chip said. "You'll get to see us, obviously, in maybe a six months delay like the rest of the world, but we're excited to be back."

That likely means that baby Crew will have some on-screen time like his siblings. But the Gaineses have been careful to keep their kids' lives from revolving around their TV show. As Joanna told People, she and Chip are keeping the kids' lives as simple as possible:

They’re so young and we want to give them the chance to have a normal childhood. So they don’t really understand that we have a show. They don't get it.

Like any working mother, Joanna struggles to balance her time. As she explained in her blog, she doesn't ignore the fact that her kids want to spend time with her. And when they beg her to stay home, she levels with them:

...I always explain to them that being with them is my favorite thing in the world. I explain that I have to work just like they have to go to school. ... Taking a few seconds to let them in on this other huge part of my life has really helped them understand that mom and dad have a big job to do.

As the kids grow up, they will probably start to "get it" — when it comes to their family's business — a little bit more, but I have no doubt that their parents will keep them focused on what really matters. And squeeze in all of the quality time that they can.

Get ready, Crew, you're in for one heck of a life!