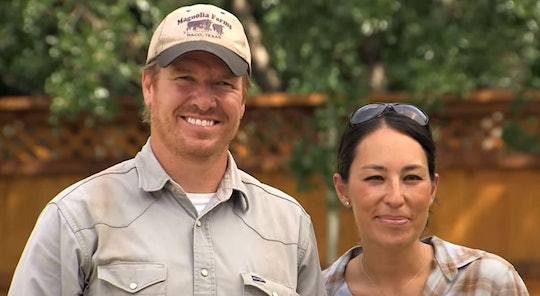 Joanna Gaines has almost become the poster girl for perfection. The designer and mother of five has made a living out of transforming homes into places of cool, calm, rustic comfort. And a casual scroll through her Instagram feed shows pictures of her gorgeous farmhouse in Waco, Texas, her beautiful family... her happy, perfect life. But don't be fooled by all of that perfection. Just like the rest of us, the Magnolia magnate finds all of that pressure to be perfect stressful. In fact, Joanna Gaines opened up about her social media anxiety recently, and I have a feeling fans will be grateful to know she shares their struggle.

The former Fixer Upper star and her co-star husband Chip Gaines have five children together, 14-year-old son Drake, 12-year-old daughter Ella, 10-year-old son Duke, 8-year-old daughter Emmie Kay, and finally 6-month-old baby boy Crew. Ever since they made the decision to end their wildly popular HGTV series, Joanna has been sharing idyllic posts of life on the farm with her 9.7 million followers on Instagram. Rocking her baby boy to sleep on the front porch with their sweet dog at her feet. The kids settling in for naps with their dad and baby brother. Late night swims under the stars. And while I'm certain all of these images are genuine, they come at something of a price to the busy mom.

In the spring issue of her Magnolia Journal, Joanna shared an editorial where she reflected on her rise from a "handful" of followers to the millions who pay attention to her every move now:

It wasn't so very long ago that I had only a handful of followers. … There wasn't any pressure to post anything at all, so whenever I did, it didn't really cross my mind whether or not people would 'like' it. When that number started to rise and people were sharing their opinions about what I was posting, that changed. I could feel insecurity start to creep in, and posting a photo was no longer an act of enjoying the in-the-moments of life but rather a more calculated decision.

The pressure to appear perfect is something that many moms struggle with on a daily basis, even without millions of followers. In a 2018 survey by The Priory Clinic, 50 percent of parents admitted that social media images were creating an ideal of parenthood that was unrealistic and unattainable, as per The National. It must be so much more difficult when your business is directly attached to your image, like in the case of Joanna Gaines.

Fortunately Joanna became aware of her anxiety and has taken mindful steps to curtail the effect of social media in her decisions to post, as she wrote in Magnolia:

I love to snap photos of my kids whenever it’s physically possible. But when I hear myself start to say something like 'move slightly to the left' just so I can get the perfect angle, that’s when I know it’s time to check myself. That means putting my phone somewhere it won’t be a distraction.

At the end of the day, we still have choices to make as parents. Sometimes we can choose to step away from social media if it's becoming too toxic, as Joanna Gaines does every now and then. Check in with yourself, and realize that what you're seeing on social media is almost never the whole story.