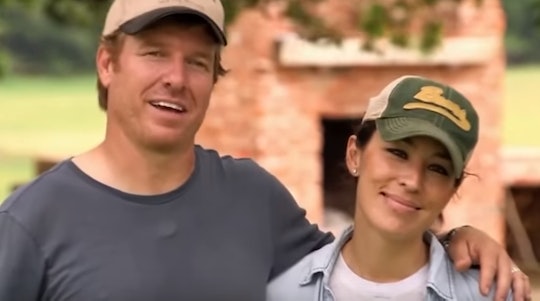 As a mom of four in my forties, I admit I've been following the news of Joanna Gaines' fifth pregnancy with real wonder. It's difficult for me to wrap my head around the idea of welcoming another baby after so many years out of the baby game, but it's also sort of beautiful and intriguing. So naturally I was excited to see Joanna Gaines open up about having a newborn in her life for the first time in eight years in a recent interview with People. Because it must feel so different this time around for her.

The Fixer Upper designer and her husband Chip Gaines announced that their fifth child, baby Crew Gaines, had arrived this past weekend. Crew joins the family's four older kids; Drake, 13, Ella, 11, Duke, 9, and Emmie Kay, 8. He is the first baby for the couple in eight years, and Joanna admitted back in May that this fifth pregnancy came as a total surprise to the couple.... although her husband Chip didn't mind tweeting about the "romantic" night that led to their newest baby. Chip tweeted, according to CNN, "You might recall a few months back. The ever amazing, ever romantic @JOHNNYSWIM was in Waco. And they put on a little too romantic of a concert.. anyways, one thing led to another, & we are officially pregnant. And I could not be more EXCITED! #5 #7ThePerfectNumber."

They weren't the only ones who were excited, of course. Joanna shared a pic on Instagram of her four older kids huddled outside of her hospital room door over the weekend with the caption:

One of my favorite pics a friend showed me after Crew was born. They couldn't wait to meet their new baby brother ❤️

This picture puts the Gaines' new family dynamic in real perspective, actually. Because the new parents are actually pros at parenting by now, it stands to reason, but that doesn't mean they aren't as excited and overwhelmed as any other new parent out there. As Joanna told People in a recent interview:

I have forgotten almost everything, so it feels brand-new. I tell Chip that I feel 25, and in my mind there’s something about it that gives me an extra kick in my step. Forty and pregnant … who would have ever thought that was going to happen? But I’ll take it.

The Magnolia magnate and cookbook author was equally as open about how it felt to be pregnant at 40, especially those sweet, sweet pregnancy cravings. As she told Entertainment Tonight in April:

For Drake, [I craved] ice and lemons, so I always made Chip go to the gas station late at night to get the crunchy ice because we didn't have that in our fridge. With the boys, it was always something citrusy and right now, I am craving oranges and lemons. And then [with] the girls, [I wanted] salty. I normally don’t crave citrus, but I have to have an orange every day now.

Now that her pregnancy is over and baby Crew has arrived, Joanna told People she couldn't be more excited for what the future brings. Especially because they can expect to have kids in the house a little longer than they thought. According to People, she said:

The couple has always spent loads of time with their kids outdoors on their farm outside Waco, Texas, as evidenced by the many photos they share on social media. And I would imagine that having a baby in tow will change their dynamic, of course. But luckily for them, they have four extra pairs of hands to help out on family outings.

It just goes to show you that life can keep on surprising you, and the big secret is to just go with it. Because you never know what's going to happen, right?