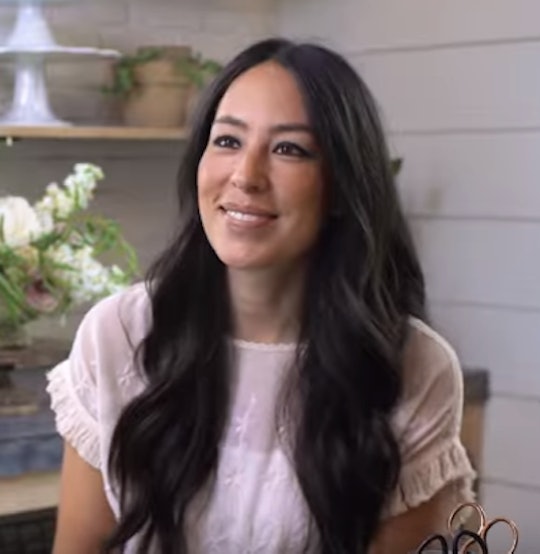 If there's a person out there who could trademark the art of having one of those houses that looks accidentally perfect, I nominate Joanna Gaines. She has made the whole farmhouse chic look seem effortless, because that's her job but also because I suspect that's just the kind of gal she truly is. A smiling, easygoing woman who takes life as it comes. But even this former Fixer Upper star has her struggles. On Sunday, Joanna Gaines' shared a photo of baby Crew's nursery after a "late night" and it might come as a bit of a relief to some moms who worry they can't pull off that whole easy perfection thing. Because not even Joanna Gaines can pull it off 100 percent of the time.

Joanna and her husband Chip Gaines welcomed their fifth child, baby boy Crew Gaines, on June 21. They're already parents to two daughters (11-year-old Ella and 8-year-old Emmie Kay) and two sons (13-year-old Drake and 9-year-old Duke). While they clearly have a considerable amount of shared experience in the parenting department, there's just not much you can do if you have a baby who doesn't feel like sleeping through the night. Not when they're under 2 months old, at any rate. And Joanna was not above sharing a photo of her son's gorgeous nursery to provide "evidence of a late night up with my boy," as she wrote on Instagram.

In the picture, Crew is in his little chair wearing a nightgown with a drawstring bottom (which I also swore by for easy nighttime changing when I had all four of my sons, so Joanna Gaines and I are basically the same), while his carpet is strewn with detriment from a sleepless night. Baby wipes, blankets, clothing, diapers. According to Joanna's hashtags, it looks like the baby had a bit of a #blowout. And moms totally related on social media.

This image is a far cry from the original peek at Crew's nursery, which Joanna gave fans just a week after he was born. In that picture, the nursery looked just as one would expect the child of the Magnolia designer's room to look: comfortable, tidy, and warm. With nary a thing out of place.

Oh how the times have changed.

While nobody loves a diaper blowout, it doesn't seem like Joanna is minding the late nights with her son. She's posted several pictures of her family spending time outdoors in the evening on their farm near Waco, Texas. And naturally, it all looks pretty amazing.

In another recent photo, Crew is sleeping nestled in a blanket under the stars while the rest of the family plays a "late night game of sharks and minnows," according to Joanna's caption on Instagram.

Joanna doesn't seem to be minding much of anything these days; she and her husband Chip have ended their Fixer Upper series on HGTV after five seasons, giving Joanna plenty of time to bond with her kids. As she noted in a recent essay for her magazine Magnolia, according to PopSugar, Joanna's surprise pregnancy has been a true gift in her life:

It's sweet how, even in the most unpredictable ways, we're given exactly what we need for that exact moment in time. It wasn't something I could have anticipated. But being pregnant and "forced" to slow down has been a gift.

Joanna Gaines is still doing what she loves these days: making everything around her look beautiful and welcoming. But it's nice to know she's not above showing how it looks when a little chaos descends into her peaceful home.

In the form of a late night and a diaper blowout.