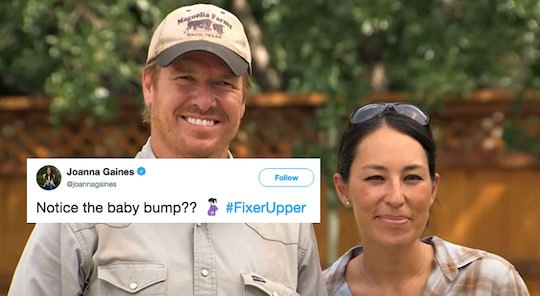 It's hard to believe it's only been five years since HGTV first introduced fans to Chip and Joanna Gaines. Five years of shiplap, of Chip's and his well-intentioned dad jokes and Joanna's good-natured eye rolls at said dad jokes. We've seen a whole lot on Fixer Upper, tears and mishaps, renovations and reinventions. But there was one thing we never managed to see. Until now. Joanna Gaines' pregnancy bump made its first appearance on Fixer Upper, so I guess we can all die happy now.

Chip and Joanna are expecting another child this year to add to their brood of four children, and this time around it's another boy. The new baby will join siblings Drake (age 12), Ella Rose (age 11), Duke (age 9), and Emmie Kay (age 7). Chip announced the pregnancy via his Instagram account back in January with a cute photo of the couple wearing matching grey hoodies and standing in profile. Joanna clearly has a small baby bump in the photo while Chip is pushing his belly out to look pregnant himself (see? Dad jokes galore with this guy). He captioned the photo "Gaines party of seven.. (If you're still confused.. we're PREGNANT)."

Ever since the couple announced they were expecting, fans have been desperate for more details. Perhaps especially considering their beloved show, Fixer Upper, will be ending after this season. Which means far less of Chip and Joanna Gaines, I suppose, although we'll always have all of their Magnolia businesses to check out, including all of the fabulous Hearth and Hand merchandise from Target.

And thank goodness for their new Magnolia Table restaurant, because it was during a recent filming of Fixer Upper on an episode called "A Delicious Fixer Upper" that fans were finally treated to a first on the show; Joanna's baby bump. Hidden slightly under baggy clothes, but visible nonetheless.

After the episode aired, Joanna Gaines took to Twitter to see if any of her eagle-eyed fans noticed the appearance of her "baby bump."

She really needn't have asked. Of course everyone noticed her bump; it's pretty much half the reason people are watching the show these days. Well, that and excellent home design advice. Also her laid back style, which is almost impossible to emulate unless you are genuinely laid back.

Either way, fans who noticed her bump couldn't have been happier for the growing family.

While getting a glimpse of Joanna's "baby bump" was a Fixer Upper first, it's not the first time the bump has ever been spotted. She posed for pictures with Chip and football player Tim Tebow at the Tim Tebow Foundation Celebrity Golf Classic earlier in March, looking happy and pregnant in a black cocktail dress.

And back in February, Joanna gave fans a glimpse of her growing bump during an event about the art of letter writing for her magazine, Magnolia Journal, at her restaurant, Magnolia Table, in her hometown of Waco, Texas. This girl really likes her magnolias, I'll tell you.

Now that fans have gotten a glimpse or three at Joanna's burgeoning bump, I have an upsetting piece of information for you; there's only one episode of Fixer Upper left. Which means that yes, we might see the bump again, but that will be the end of Fixer Upper. Not the end of all things Gaines, of course, but the end of an era. A beautiful time of home renovations that miraculously always seemed to happen on days filled with sunshine, when Chip and Joanna Gaines helped families fix up their homes... and where Joanna's "baby bump" is proof that there is still more good in the world to be found.

I hope I'm not overselling this too much.