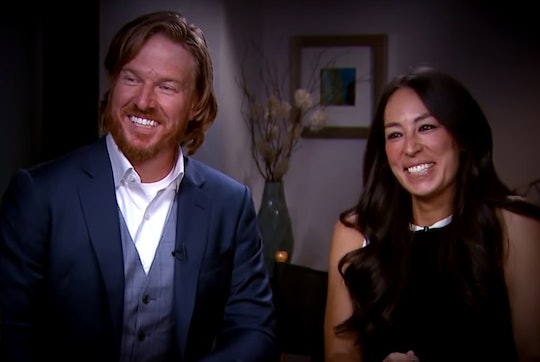 The Fixer Upper duo is expecting baby number five and today, Joanna Gaines shared a photo of her "baby bump" on Instagram. Fans were sad to hear that the Gaines couple was ending their run on the hit TLC reality series, Fixer Upper, after just five seasons, but now that number has taken on such a positive meaning in the family and fans have been showing their support for the couple as they get ready for another Gaines baby to arrive.

On Thursday, Joanna posted a photo of herself on her Instagram account, saying that "there's no hiding" her "baby bump" any longer for the photo shoot she has scheduled today. Joanna also assured fans that she would be updating her Instagram story with behind-the-scenes photos from the shoot.

Joanna and her husband, Chip, announced they were expecting another bundle of joy, also via Instagram, on Jan. 3. In the photo, Chip and Joanna faced each other and stuck out their stomachs for the playful announcement. The two are already parents to four children: Drake, 12, Ella, 10, Duke, 9, and Emmie Kay, 7. Each of the children have appeared on Fixer Upper over the years, so fans have gotten to see them grow more and more each season. And with baby number five on the way, excitement is really at an all-time high.

Joanna and Chip are an HGTV staple, so when they announced that they were ending the series in October 2017 to focus more on family, fans were floored, even though the reason is perfectly understandable, according to TODAY. With the show being such a success, why would anyone walk away, right? But, the couple has several other businesses to juggle under the Gaines' Magnolia brand. In fact, Country Living reported that their latest venture, a restaurant called Magnolia Table in Waco, Texas, is set to opening soon. With all that and now a fifth baby on the way, the decision to step away from their television show makes more sense than ever.

In an interview with People, Joanna explained what led to the decision to end Fixer Upper:

We gave everything we had to this show — the beautiful homes and those sweet families — but this just felt like the right time to catch our breath for a bit ... The kids were so young when we started. Fast-forward to today and our oldest is almost a teenager — they’re all growing up so quickly.

Chip added that their kids showed concern over their parents' hectic schedules, which struck a chord with the couple. He revealed to People:

They would ask, "Mom and Dad, do you guys have to film again today? When is this going to be over?" ... We have the chance to regroup and refresh and find out in two years, thank God we stopped and gave each other time and energy and loved our family more than we would’ve had the resources to do otherwise.

The Gaines couple has filmed 11 months out of the year, according to People, so a demanding production schedule like this can definitely take its toll.

As Joanna has started showing her bump on Instagram, followers have left comments, calling her "beautiful" and "stunning." One commenter wrote, "You look beautiful!!! Why hide it!!! It’s a blessing!!!" Fans will surely miss the couple on their TVs once Fixer Upper is over. But, there is still hope that one day the couple will return to the small screen, as Joanna confessed to People:

We’re entrepreneurs at heart, so we’ll always be looking forward to what’s next ... As it relates to TV, you just never know.

Hopefully, Joanna and Chip keep fans in the know when it comes to their fifth little edition. It's been so cute watching the rest of their little ones grow up over the years.