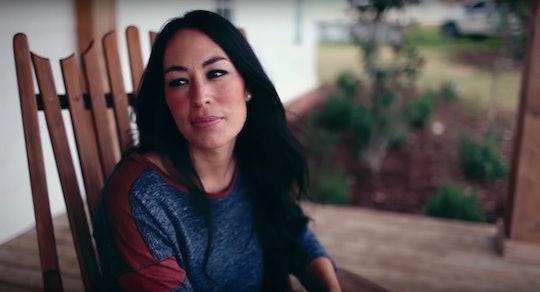 Joanna Gaines Will Star In A 'Fixer Upper' Spinoff, So Get Ready For More Shiplap Love

With the sad news that Fixer Upper will be coming to an end after the show's current season, the fact that Joanna Gaines will be starring in a new HGTV series might just have some fans feeling a huge sense of relief. After the Gaineses announced that they would be ending their hit show after five seasons, Fixer Upper fans were distraught by the news. The HGTV home renovation series has amassed a loyal following over the years, largely because of the charming personalities of its hosts, Chip and Joanna Gaines. Fortunately, though, they're not leaving TV screens altogether.

The Waco, Texas family now resides in the hearts of thousands of viewers worldwide as they talk about hard work, shiplap, and raising chickens. Yes, seriously. They're about as charming as can be, and even though they've found wide success on HGTV, the Gaineses decided to call it quits on Fixer Upper, citing that they "need to catch our breath for a moment," according to the couple's blog.

While most fans can definitely understand the need for a break, especially considering that Chip and Joanna are now expecting their fifth child, their departure was nonetheless shocking. So, now that Joanna has announced her companion show, Fixer Upper: Behind the Design, according to Entertainment Weekly, fans will still have something to obsess over.

Yes, that's right. Fixer Upper fans will get 30 more minutes of quality Joanna time starting on Tuesday, April 10 right after an old episode of Fixer Upper. Basically, the new show will be a behind-the-scenes take of how Joanna actually designed the space for the home. As avid Fixer Upper fans will know, what goes through Joanna's mind as she's designing, is always sort of a mystery. But then, in the end, it turns out perfectly. So, hopefully, Fixer Upper: Behind the Design will help to fill in those blank spaces.

But, because the show looks at older episodes and what goes on, it's still likely that the episodes were filmed a while ago, meaning that Chip and Joanna are still getting their well-deserved break, even if it doesn't look like it.

"Each of the 15 30-minute episodes of Behind the Design will air after a rerun of the corresponding Fixer Upper episode, and will dig deeper into expecting mom Joanna’s full process — from the first moments that she meets the homeowners to her Pinterest-worthy styling tricks," People reported of the show.

And it looks like viewers will also get to see some of Chip being his goofy self, as well.

News of the Gaines couple's new show was first announced back in March of 2017, but now the show is ready to premiere in all of its glory. In a statement released to People, Joanna explained that she truly cared for the people she was designing for and that this show would give viewers a front-row seat to all the action:

I can’t wait to show our fans how every piece of the design comes together before the final reveal. I want to nail every detail so that, when we walk away, Chip and I know we’ve given a family the one-of-a-kind home of their dreams.

Chip added to the sentiment of Joanna's statement, saying, "Jo puts her heart and soul into every fixer-upper we design. Our hope is that these homes become a beautiful part of each family’s next chapter."

Truly, Fixer Upper is such a popular show for a reason, and this new supplemental show will likely become a huge hit as well. And if nothing else, at least it will provide solace for Fixer Upper fans that aren't quite ready to say goodbye to Chip and Joanna.