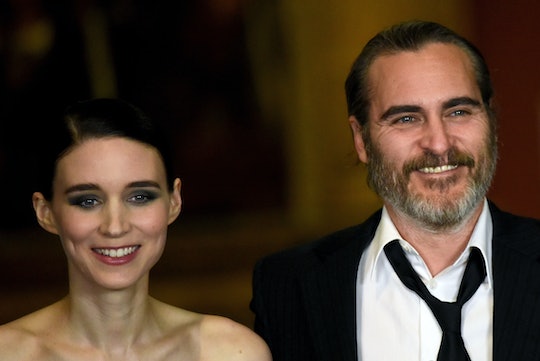 Rooney Mara & Joaquin Phoenix Could Be Welcoming A Baby This Summer

Some potentially exciting news is swirling now that Page Six has reported that Joaquin Phoenix and Rooney Mara are expecting their first child. And what's even more exciting, the couple might be expecting that baby much sooner than you would think.

While Romper's requests for comment from Mara and Phoenix's reps were not immediately returned and neither have commented on the reports publicly, a source reportedly told Page Six that the Carol actress is apparently already six months along. Mara has apparently been seen out in public wearing loose and baggy clothing, according to Page Six, which could be hiding a bump or could be exactly the way everyone is dressed during the ongoing pandemic. Until either she or Phoenix confirms, it's difficult to know.

Phoenix and Mara have been together since they filmed the movie Mary Magdalene in 2017, after initially meeting on the set of Her in 2013, according to Elle. The two got engaged last May and were seen together during awards season, when Phoenix won the Best Actor Academy Award for his performance in Joker. If the anonymous source is correct and Mara is close to six months pregnant, that means she would have been expecting when she was at the Oscars in February.

This baby would be the first for both Mara and Phoenix, who is one of five children himself including his older brother and actor River Phoenix, who tragically died of a drug overdose in 1993. And while they might be new to the parenting game, both actors have committed themselves to a healthy lifestyle that should come in handy as parents. They are both staunchly vegan, with Phoenix's dogs Oskar and Soda only eating vegan as well, according to Vanity Fair. As for Phoenix, he also has a reputation for being a deeply committed person.

Whether he is committed to veganism, his career, his pets, or Mara herself, the framework certainly seems to be there to be a great dad.