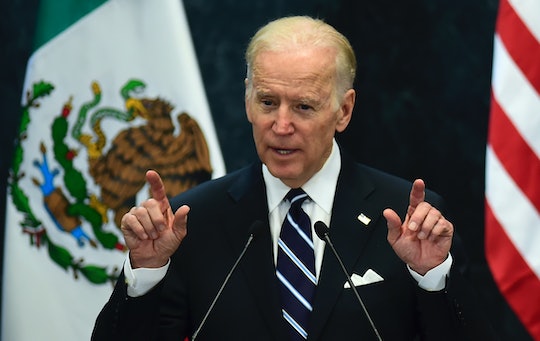 Joe Biden Calls For Sexual Assault Prevention At The Oscars, & Not Just For Women

When Vice-President Joe Biden came on stage at the 2016 Oscars to introduce Lady Gaga's song about surviving sexual assault, he continued the theme of making this the most political Academy Awards in memory. In keeping with the message of Gaga's song, Biden called for sexual assault prevention and support for survivors.

"Despite significant progress over the last few years, too many women and men, on and off college campuses, are still victims of sexual abuse," Biden said. "And tonight, I'm asking you to join millions of Americans, including me, President Obama, the thousands of students I've met on college campuses, and the survivors that are here tonight, to take the pledge. The pledge that says 'I will intervene in situations when consent has not or cannot be given.'"

His call to action was met with enthusiastic cheers.

"Let's change the culture," He continued. "We must and we can change the culture so that no abused woman or man, like the survivors you will see tonight, ever feels they have to ask themselves 'what did I do?' They did nothing wrong."

He then encouraged viewers to visit ItsOnUs.org, whose members pledge to do the following.

To recognize that non-consensual sex is sexual assault.

To identify situations in which sexual assault may occur.

To intervene in situations where consent has not or cannot be given.

To create an environment in which sexual assault is unacceptable and survivors are supported.

He is clearly passionate about the cause, and they seem thrilled to have him as an ally.

Biden's appearance was significant for a variety of reasons, not least of all because he's the second most powerful person in the free world. He used his platform to discuss a controversial and delicate issue, and he did so with force and sensitivity. And he also used this moment to shed light on those less-discussed victims of sexual assault — men. Yes, statistics show that one in five women will be sexually violated by the time they leave college, but one in 20 men will experience the same fate, and those victims require attention, visibility, and support too. Bravo, Biden.