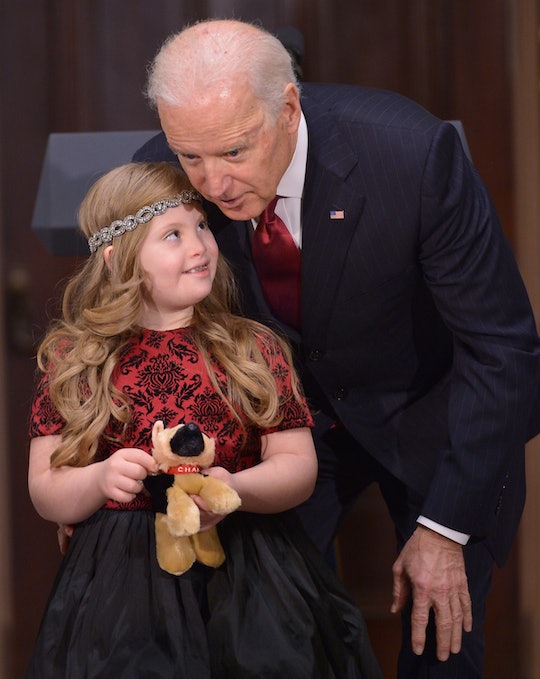 Stop What You're Doing: It's Joe Biden With Kids

There's not much I'll miss about 2016. I won't miss following the election, obviously, nor will I miss the feeling I experienced when the final results came in and we all knew who had won. I won't miss the disappointment, or the worry, or the fear. But here is what I will miss: Vice President Joe Biden. While I am also a big fan of Biden's bff, President Obama, there is just something about good old Joe that makes you want to befriend him. Something calm and self-deprecating and good. And now there are these videos of Joe Biden with kids to remind us why so many of us are Team Biden.

The vice president was on hand in Washington on Tuesday to help swear in new lawmakers of the 115th Congress. It's a day for members of Congress to bring along their families and pose for photo-ops. It could have been a bit of an awkward day for Biden, considering President-elect Donald Trump's surprising victory in the 2016 presidential election, not to mention that Congress will be under a Republican majority rule. But you know what cuts through awkward political tension better than anything? A bunch of kids dressed in their Sunday best who don't give a rat's ass about politics. Mixed with a happy-go-lucky vice president who clearly loves kids, the potentially awkward day was turned into the political version of a family reunion picnic.

See, here's Biden greeting Florida Sen. Marco Rubio, and basically telling him to get lost so he can hang out with the kids:

There may have been work to do and drama to watch unfold (a speaker of the House needed to be chosen — would former GOP Speaker of the House Paul Ryan get to keep his job after openly clashing with Trump during the election?), but mostly it was amazing watching Biden interact with the kids.

Here he is getting dissed by this adorable baby:

Here he is, searching for a baby to swear-in:

Biden and his bracelet buddy, President Obama, both have a history of playing well with kids. And sure, I know the cynics out there will be all "It's all faked, they're really lizards under their skin" and such. But please see this picture of Biden with a bunch of kids and water guns; We'll call it Exhibit A:

As for Obama... he is so adorable with kids that he got his own hashtag, #ObamaAndKids:

So here's to you, Vice President Biden. Few men could have been in the White House with Obama and managed to come away looking, like, 15 percent cooler than the President Himself. You managed to carry your weight in memes, Oscar presentations (I mean, Lady Gaga and Biden? Right?), and making goofy faces at babies.

I don't know if we'll see the same level of entertaining humanity with the next administration. Vice President-elect Pence? The ball's in your court.