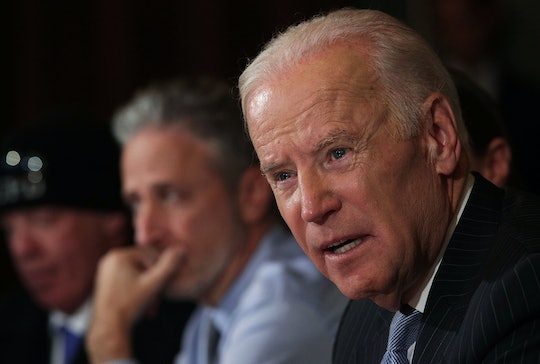 Joe Biden On Why Men Should Speak Out About Sexual Assault

Some friends and I were chatting about our own instances of sexual harassment at a dinner party recently. We are a group of women from varied backgrounds, and our years span two decades in age differences. Yet every single one of us had a story. About being afraid, or feeling threatened... or worse. One of the men at the party, a kind, loving, gentle man, listened with wide-eyed horror. All of you have been sexually harassed? He asked. Seriously? When Vice President Joe Biden says that men need to speak out against sexual violence, I think about my male friend's wide-eyed, horrified innocence, which is its own kind of benign complicity. It's also exactly what Biden believes needs to change if we are ever going to end sexual violence against women.

Joe Biden might not be the vice president any longer (cue the silent sobbing), but that doesn't mean he's turned his back on what was arguably one of the most important pieces of legislation in his long political career; the Violence Against Women Act of 1994. The criminal justice bill Biden drafted as a Delaware senator was "focused largely on improving how law enforcement and the court system respond to domestic violence." Until the VAWA came about, domestic violence issues were still generally considered a "household" matter, according to the Justice.gov website.

A lot has changed since 1994, thanks to the VAWA. According to a recent essay Biden wrote for Cosmopolitan, domestic violence is down by 63 percent, 2,000 rape crisis centers and shelters for battered women have been opened, and a national hotline has answered more than three million calls. But it still won't be enough until there is no such thing as a bystander who is willing to look away. As Biden wrote in his Cosmopolitan column,

In my view, men’s silence when they see this happening is complicity. We also know that sexual violence happens in LGBTQ communities too. It’s on Us is about changing the culture for everyone.

Biden initially partnered with President Obama to create It's On Us, a site that asks everyone to pledge, among other things, to "intervene in situations where consent has not or cannot be given." To date, over 400,000 people have signed the pledge to "do their part to create an environment in which sexual assault is unacceptable." Biden wrote that he and Obama had a clear vision when creating It's On Us:

We wanted to make it clear that everyone — and I mean everyone — from the president of the university, to the dean of students, to the coaches, to the students themselves, has the responsibility to speak up. We called on men to step in, at a bar, at a party, in a dorm room, or anywhere they might see a woman being targeted for sexual assault, especially if she is incapacitated by drugs or alcohol or for any other reason is not able to consent.

This next generation of humans, the same ones who are too often vilified as dispassionate or selfish, have given Biden renewed hope for the future. As he wrote in his essay:

Students are leading the way, and they inspire me. In huge part because of them, we are so much closer to a world where no woman will ever blame herself for being sexually assaulted and no man will make excuses for this unconscionable behavior.

Maybe in 20 years, no women will be sitting around a dinner party casually swapping tales of fear. Maybe they will just be drinking wine and eating cheese. Here's hoping.