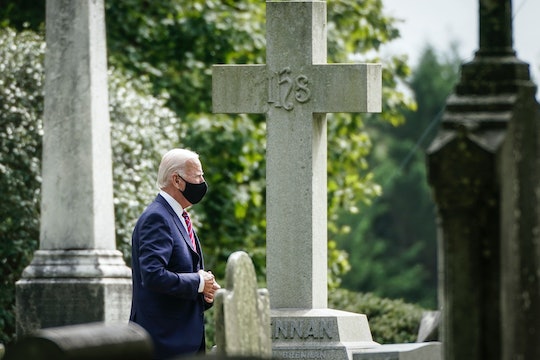 On Nov. 3, what will go down in history as perhaps one of the most important days of his political career, former Vice President Joe Biden visited his son Beau's grave on Election Day. He could well be the 46th President of the United States in the coming hours and days, he could be facing weeks of interviews and upheaval. But Biden chose to start the day with a quiet visit to his son's grave, perhaps because he is, above all, a dad who continues to grieve for the child he lost too soon.

Joseph Biden III, or Beau Biden as he was commonly known, died in 2015 after battling brain cancer. He was just 46 years old, leaving behind wife Hallie Biden and their two young children, son Hunter and daughter Natalie. It was a terrible loss for Biden, who was already in his second term at the White House with President Barack Obama. In Beau's obituary, his father said his heart was "broken" by his son's death, "It is with broken hearts that Hallie, Hunter, Ashley, Jill and I announce the passing of our husband, brother and son, Beau, after he battled brain cancer with the same integrity, courage and strength he demonstrated every day of his life."

On Tuesday, Biden visited Brandywine Roman Catholic Church in Greenville, Delaware, where his son is buried, after attending church services, according to Politico. Biden's first wife Neilia and 1-year-old daughter Naomi, both of whom died in a car crash in 1972, are also buried in the same cemetery.

Throughout his more than 40 years in politics, Biden has managed to prioritize his role as father no matter the circumstances. In the early days, when he was raising Beau and his little brother Hunter after the loss of their mother, Biden's nickname was "Amtrak Joe" because he was always trying to finish in time to take the train home to his kids.

Now, all these years later, Biden is still finding time to be a dad in the middle of politics. Finding time to visit his son Beau, who he said always encouraged him to run for president, according to a 2015 interview with 60 Minutes.

Biden's son might have wanted him to become president, but the presidential hopeful himself told MSNBC's Morning Joe in January that he wished it was his own son running in 2020, saying as he wiped away tears, "Beau should be the one running for president, not me. Every morning I get up Joe, not a joke, and I think to myself, 'Is he proud of me?'" On Tuesday morning, as Biden checked in at his son Beau's grave, I hope he found the answer.