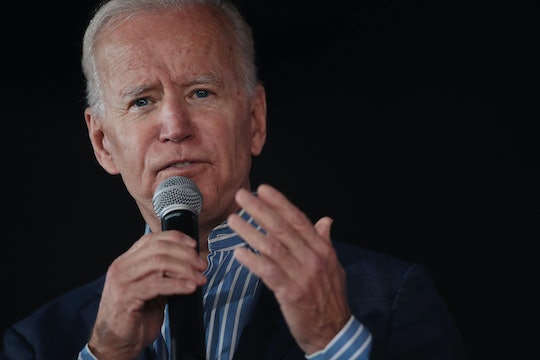 Vice President Joe Biden had a bit of a tough night Wednesday during the second round of the Democratic debates, with many of his fellow candidates bringing up controversial issues from his past. Just one example? New York Sen. Gillibrand was quick to point out that Biden's 1981 child care tax credit vote directly opposes his current stance concerning child care. Needless to say, Gillibrand wasn't afraid to go up against Biden regarding this discrepancy.

To give some context, the issue Sen. Gillibrand brought to the debate stage had to do with an opinion piece Biden wrote in 1981. Gillibrand wanted Biden to explain why he opposed a child care tax credit vote nearly 40 years ago when he was a senator for the state of Delaware. Biden wrote for the Indianapolis News at the time, according to the Huffington Post: "I think it is a sad commentary on this society when we say, as a matter of social policy, that we should make it easier for people who have neither the financial necessity nor the personal need to forget their responsibility to take care of a child all day from the time the child is an infant until the time he or she gets in school."

He continued, "I do not care whether in a modern marriage you want the man or the woman to take that responsibility. That has to be resolved by each couple individually."

It is important to note, however, that Biden said he opposed the child care tax credit plan on a financial basis, supporting its expansion for couples making less than $30,000. He voted against offering a child care tax credit for people making more than that amount, and also said that he believed there shouldn't be a cap for single parent families. Despite this, Gillibrand pointed out that Biden shared a particularly problematic statement in his 1981 op-ed piece, particularly when he said that allowing women to work would "subsidize the deterioration of the family." Eep.

At the time, this child care tax credit was endorsed by women's rights groups who felt it was a big step towards acknowledging the changing face of the American family, according to Yahoo News. There were more single mothers, who were also the sole supporters of their families. Sure, Biden might have wanted to take a stand against wealthier families taking advantage of the child care tax credit, but essentially his vote against the credit now opposes his proposed plan to offer every family an $8,000 tax credit to help offset those costs, according to The Christian Post.

Of course, Biden could have evolved over the past 40 years and his views might have changed. But the real issue during Wednesday night's debate seemed to be his reluctance to answer Gillibrand's questions, a sentiment that didn't go unnoticed by viewers on social media. And If Joe Biden wants to be the President of the United States, he might want to get more comfortable with people bringing up his voting history.