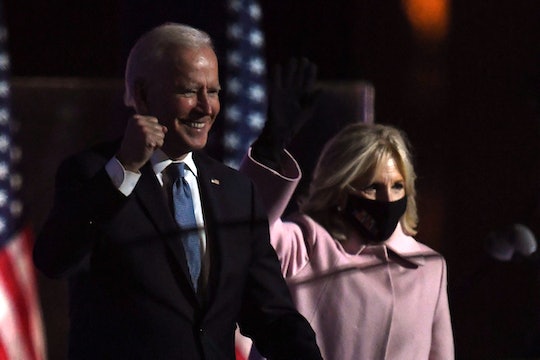 After a long, tense night of poll projections, former Vice President and Democratic presidential nominee Joe Biden delivered a speech on election night that focused on staying calm and commended voters for their patience. In other words, his was the voice of reassurance in a time of enormous anxiety for millions of Americans. And as Biden reassured Americans as best he could about their future, he quietly racked up more votes than any other presidential candidate in history.

Biden watched the election results come in on Tuesday night at his home in Wilmington, Delaware. Despite polls that suggested Biden's victory over President Donald Trump, the night saw a presidential race too close to call by the end of the evening. Several swing states like Michigan, Pennsylvania, and Wisconsin continue to count mail-in ballots, according to The New York Times.

After a particularly acrimonious election season, Biden was surprisingly calm and collected when he shared a brief speech in the early hours of Wednesday morning. As he explained it, he was prepared to wait until "every ballot was counted" after Election Day was over.

"Your patience is commendable. We knew this was going to go long, but who knew we’re going to go into maybe tomorrow morning, maybe even longer," Biden said. "But look, we feel good about where we are. We really do. I’m here to tell you tonight, we believe we’re on track to win this election. We knew because of the unprecedented early vote and the mail-in vote it was going to take a while. We’re going to have to be patient until the hard work of tallying the votes is finished. And it ain’t over until every vote is counted, every ballot is counted."

As Biden was staying calm, he was also making history. Even before all of the votes have been counted, Biden has reportedly earned more votes than any other president in U.S. history, a record that was previously set by President Barack Obama. According to the Boston Globe, Biden has a running count of 69,629,972 votes in his pocket. Obama became president for the first time in 2008 with 69,498,516, the highest ever recorded up until that point.

When Biden chose to focus on waiting for all the ballots to be counted rather than bragging about his own historic moment, this was the measure of a true leader and the coming days will decide if the rest of the nation agrees.