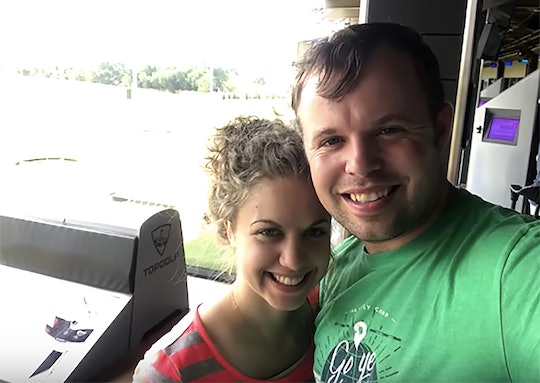 It looks like it's another exciting day in the Counting On universe. John David Duggar and Abbie Burnett are engaged, Us Weekly reported on Wednesday. The happy news comes just one month after the couple announced their courtship on June 26, 2018. Talk about a fast turnaround, right?

If you know anything about the Duggar family, you already know they don't waste any time when it comes to marriage. Michelle and Jim Bob Duggar's children typically get engaged after a few months of courtship, mostly because they don't want to be in the position to break any pre-marriage rules regarding intimacy. Another reason concerns family planning — the Duggars want to have as many kids as possible, so why wait?

As for John David, there's a good chance he sped up the courtship because he's 28 years old. Although that's not old by any means (I can't emphasize this enough), it is by Duggar standards. Josh Duggar got hitched when he was 20, Josiah Duggar said "I do" at 21, and Joseph Duggar wed Kendra Caldwell at 22. Translation: John David was overdue for an engagement based off of the Duggar marriage timeline.

The good news is John David couldn't be more ready to wed Burnett. “The proposal and the ‘yes’ really solidified that we want to spend the rest of our lives together,” the couple said in a joint statement, according to Us Weekly. “It was a special moment to share together.” Aw.

So, how did John David ask Burnett to marry him? It looks like John David transformed an airplane hangar (he's a licensed pilot, remember?) into a romantic wonderland, complete with a movie theater marquee and a bunch of petals shaped into a heart. The marquee read, according to People: "WILL YOU MARRY ME?" Wow, who knew John David was so lovey-dovey? Kudos to John David for whipping together such a cinematic proposal (no pun intended) — this might be the most extravagant Duggar proposal yet.

John David, who admitted to falling in love with Burnett "quickly," also opened up about why he waited to propose. “We’ve been ready for this step for a little while, but it was really just I had a lot of things I wanted to get done to make it really special,” John David explained in a video shared to TLC's website. “I don’t know if I succeeded or not, but it was a lot of things.” Luckily for John David, Burnett said the proposal was a complete success.

The next step for John David and Burnett is their wedding. The two are already "thinking" about their nuptials, and I assume the big day will be sooner than later. Josiah married Lauren Swanson just three months after their engagement, while Joseph got hitched to Caldwell four months after the proposal. There isn't a lot of time between engagements and weddings in Duggarland.

Thankfully, the two will have plenty of help from their excited friends and family throughout the wedding process. It's safe to say the Duggars are thrilled for Burnett and John David's next steps. Jim Bob and Michelle said in an official statement to their family website:

We are thrilled to announce the engagement of John-David and Abbie! They are a wonderful match and make a beautiful couple! Abbie is a lovely young woman, full of tenderness and compassion. She has a deep love for the Lord and we are so delighted that John-David has asked her to be his wife! We love weddings in this family and can't wait for the next one!

Congrats to John David and Burnett on their engagement. This is an exciting time for the couple, and Counting On fans can't wait to watch them walk down the aisle.