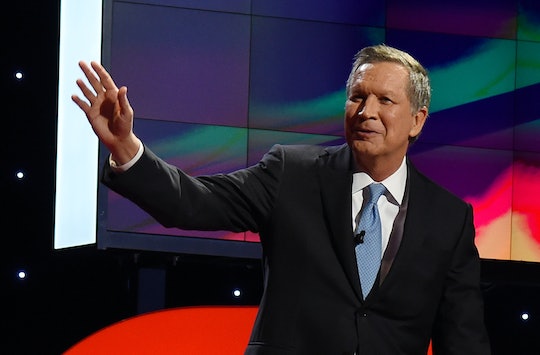 He’s still in the race, but John Kasich has had a few obstacles — primarily, getting television time and recovering from a slump in polls. In fact, at one point, the Ohio Governor was a top three candidate. So needless to say, the stakes were high going into Tuesday. As it turned out, Kasich's closing statement at the GOP debate, much like his performance the rest of the evening, was a bit lackluster, and also extremely specific.

Going in, it was clear that Kasich has a ton to lose — or gain — from Tuesday's debate. And based on his performance Tuesday, the field may be thinning out, possibly taking Kasich away. As always, the Governor is about centering an issue and has taken several opportunities — one being his defense of same-sex marriage — to speak on “true” Conservatism.

But it seems as of late, Kasich has seized opportunities to split with his party. Following the San Bernardino shootings, he made headlines earlier this month by suggesting that people on the terror watch list shouldn’t be able to purchase guns. “Of course, it makes common sense to say that, if you're on a terrorist watch list, you shouldn't be able to go out and get a gun, although you will be able to get it illegally,” Kasich said on State of the Union.

And like GOP Presidential hopeful Jeb Bush, a usually non-combative Kasich is less hesitatant to spar with Donald Trump. Not only is he churning out campaign ads left and right but he is also hopping on Twitter in hopes of ending this Trump lovefest. “You may value your constitutional rights, but @realdonaldtrump is not as concerned,” Kasich tweeted about the frontrunner on Monday.

However, Kasich’s closing argument didn't quite live up to the occasion. He chose to work the Ohio angle — hard — and also wax sentimental. Here’s what he said to finish out the night:

No Republican has ever been elected president of the United States without winning Ohio. Let me give you a little tip on how you win in Ohio. It’s reform, hope, it’s growth, it’s opportunity, and it’s security. The people of Ohio are the people of America. The people of America are reflected in Ohio. Our message has to be big, and bold, and positive, and connect now just with people’s heads, but also connect with their hearts. We will do it, we will beat Hillary Clinton, and we will run the White House and we will strengthen and fix America, I promise you.

So lots of Ohio and rhetoric and Ohio rhetoric, but not much else. Ohio is important, but we would have liked a closing statement that was a little broader.