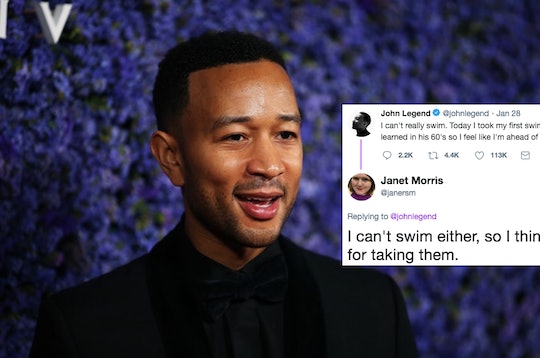 Given that it's a skill that can literally be life-saving, it's no surprise that many parents consider it important that their children learn to swim. And with things like Saturday morning community center swim lessons, and having to hit the pool for gym class serving as a kind of childhood rite of passage, it can feel almost shameful to admit as an adult if you never actually learned. But on Twitter this week, John Legend revealed he "can't really swim," and that, at 40 years old, he has actually decided to take swimming lessons. And the singer's revelation has prompted some seriously amazing responses on Twitter.

In fact, Legend's admission seems to have allowed people to discuss their own desires to learn how to stay safe in the water, because while it may not be something often discussed, it's clear he's *far* from being the only grown adult who isn't super comfortable at the pool.

Legend may be a super-talented EGOT who seems to excel at basically everything, but in his tweet, he shared that, while he did take some lessons as a kid, swimming is just something he never actually learned. Not only is he totally down to admit it though, he's also clearly ready to do something about it.

Legend wrote on Twitter, "I can't really swim. Today I took my first swim lesson since I was like 5. My dad learned in his 60's so I feel like I'm ahead of schedule."

The tweet clearly struck a chord with others on the platform, as it didn't take long for people to comment their words of encouragement, including sharing their own stories about making the decision to take swimming lessons in adulthood:

But many of the comments also made it clear that, while we may assume that learning to swim is simply something everyone knows how to do, there are many people who don't. And with Legend sharing his own decision to take lessons, it helps open the door for others who may have felt ashamed or embarrassed to admit that they, too, never learned:

But while it may at first seem like Legend's tweet is mostly just a cool reminder that you're never really too old to learn something new, it's actually far more valuable than that. By normalizing the idea that it's entirely fine to learn to swim for the first time as an adult, Legend's own example can encourage people to learn a skill that can save their lives.

After all, about 4,000 people drown in the United States each year, according to the Centers for Disease Control and Prevention, and while drowning deaths are more likely in children, being an adult who can't swim will inevitably put you at a higher risk.

But it goes beyond that, too. According to the CDC, being a minority puts you at a higher likelihood of drowning, and black males like Legend specifically face a significant risk. Not only are 80 percent of drowning death victims male, but black children between the ages of 5 to 14 are almost three times more likely to drown than white children. And they're most at risk in swimming pools: black children over the age of 5 are a whopping 5.5 times more likely to drown in a pool than white children — and the risk is highest at age 11-12, when they are *10 times* more likely to drown, according to the CDC.

Compounding on those harrowing statistics though, as Vice writer Taylor Hosking pointed out Tuesday, is that black communities in particular endure stereotypes about swimming that make it even harder for people to admit that they can't swim, or to consider taking lessons later in life. Hosking noted, for example, that years of segregation and racism kept black people out of public pools, and it's had generational consequences.

In other words? While learning to swim might be considered a built-in aspect of many white children's childhoods, it's not always the case with black children. And it's meant that they're more likely to be at risk because of it.

Legend hasn't specifically commented on the implications of race and swimming, or whether it influenced his decision, but he did at least note on Twitter that his own children, Luna and Miles, have already begun lessons, and have been swimming for months. And with Legend now learning to swim himself, it sounds like time in the pool will likely soon become something the whole family will be able to enjoy together.

Whether he realizes it or not though, by admitting that he can't swim, and that he's taking lessons, he's helped others see that there is no shame in it. And given that being able to swim is actually an important life skill, it's a pretty powerful reminder that, instead of being viewed simply as a childhood recreational activity, it's time we started to think of swimming lessons as something for everyone, regardless of age or race.