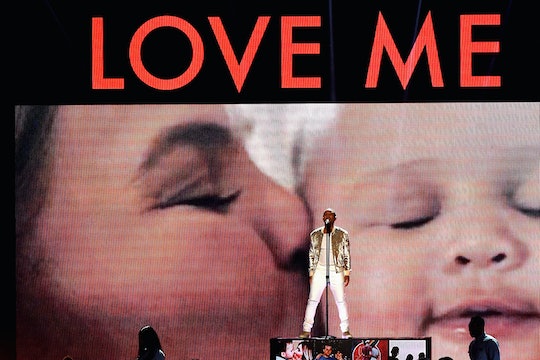 John Legend's #LoveMeNowStories Will Remind You There's Good In The World

Anger. It's as easy as breathing. Jealousy and hate and fear could be second nature to us all, particularly in the world we are living in now. But love? Love is hard. And so, so worth it. John Legend's #LoveMeNowStories are perfect reminders of what love can overcome. And it's exactly what we all need to read right this very moment.

Legend debuted his new song, "Love Me Now," on Friday, and the accompanying video will give you only the best feels. The video features not only the two loves of Legend's life, wife Chrissy Teigen and sweet little daughter Luna, but images of all different types of love. Legend's lyrics focus on the sometimes temporary nature of love and celebrating whatever time we might have with the people we love:

I don’t know what’s in the stars, never heard it from above, the world isn’t ours. But I know what’s in my heart. If you ain’t mine, I’ll be torn apart. I don’t know who’s gonna kiss you when I’m gone, so I’m gonna love you now like it’s all I have. I know it’ll kill me when it’s over. I don’t wanna think about it. I want you to love me now.

Since the song's debut on Friday and Legend's subsequent performance of it at the American Music Awards on Sunday, the singer has taken to Instagram to share stories of love from all over the world with his #LoveMeNowStories.

Abdulrahman is from Qamishli, Syria and his bride Zeren is from Hasaka, Syria. Abdulrahman worked as a ceramic maker and Zeren worked in a salon in Hasaka. Both were forced to flee the war in Syria with their families and ended up at Domiz Refugee Camp in Northern Iraq, where Abdulrahman is still able to work as a ceramic maker in the camp. Abdulrahman and Zeren met at a house party a year ago and fell in love quickly. Though their relationship was initially a secret, they were married a year later and are striving to build a life together at Domiz.

Norman Casiano, 26, and Ryan Cunnington, 20, both currently reside in the city of Orlando. Norman was born in the city of San Juan, Puerto Rico and moved to Orlando in 1996 where he has resided ever since. He attended college at Le Cordon Bleu and received his associates degree but soon decided that the kitchen wasn't for him. Instead, he would pursue his passions in fashion and makeup. Norman frequented Pulse nightclub and felt safe there until June 12th, when a gunman rained fire on them and some close friends. Norman was shot twice and although his life changed dramatically on that night, he has begun his healing process and continues to do better thanks to his friends and family. Ryan was born in Fort Myers, Florida and went to FGCU, but recently moved to Orlando to transfer to UCF. He is currently studying exercise science for occupational therapy and works as a part time server.

Nata and Julissa grew up together on the backstreets of Cabarete Town, Dominican Republic in an impoverished neighborhood of Dominicans and Haitians known as "La Cienega." Life in "La Cienega" has many challenges: the infrastructure is fragile and the opportunities are sparse. But they have each other and they have the ocean.

Miles is a proud family man from the Turtle Mountain Band of the Chippewa Tribe. A retired elementary school teacher with a passion for mentoring youth, Miles has dedicated his life to raising his 9 children and helping to raise his grandchildren alongside his wife of more than 30 years, LaDonna. LaDonna is from the Standing Rock Sioux Tribe and a historian for the tribe whose family has lived on the lands since 1873. She is the founder of the Sacred Stone Camp, where the Dakota Access Pipeline protests began to resist the takeover of the tribe’s sacred water lands by the U.S. Government. LaDonna and Miles met in college, and for 30 years they have been praying for unity and solidarity, and working to help leave the world a better place.

Since the Nov. 8 election, many protesters who reject the isolationist nature of new President-elect Donald Trump's campaign have sprouted up around the country. While Legend(who endorsed Democratic nominee Hillary Clinton) wrote in an Instagram post that his song was not directly related to Trump's presidency, he did use his platform to preach love, tolerance, and kindness.

But in this time of conflict and uncertainty, it’s clear that we all need more love. I find it in my family and in my music. Embracing my family has made today full of love and light despite the bad news. But it’s also important that we show love and empathy to people who may not look like us or live like us. Those who are marginalized and rejected, feared and left behind.