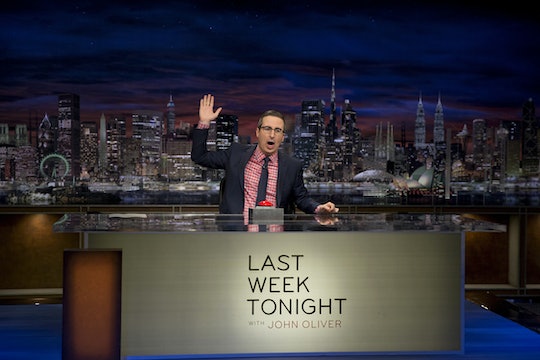 John Oliver is officially back, which is exciting news for everybody who likes their current affairs with a side of snark. Unfortunately, the first episode of Season 5 of Last Week Tonight necessarily had to start with a take on the heartbreaking school shooting in Parkland, Florida. John Oliver's gun control segment on Last Week Tonight is a call to take action. Or at least yet another biting indictment of hypocrisy that Oliver is so well-known for.

Sadly, on Wednesday afternoon, a 19-year-old former student entered Marjory Stoneman Douglas High School in Florida and opened fire on students and faculty, leaving 17 people dead and many more injured, according to NBC News. President Donald Trump's reactions to the tragedy have drawn fierce criticism, not least of all from the young survivors of the shooting, which Oliver drew attention to during the segment. Oliver addressed the students' newfound organization in response to the shooting, March for Our Lives, and included a clip of student Emma Gonzalez telling politicians gun advocates "We call BS" to the usual responses to school shootings — things like offering up "thoughts and prayers" instead of calling for policy changes. Oliver pointed out that it's ironic that the most mature responses come from people too young to say "bullsh*t" in front of their parents.

In response to the shooting, Trump attributed the shooter's actions to mental illness on Twitter, saying, "So many signs that the Florida shooter was mentally disturbed, even expelled from school for bad and erratic behavior. Neighbors and classmates knew he was a big problem. Must always report such instances to authorities, again and again!" This initial response drew huge criticisms for several reasons, including the fact that Trump himself rolled back Obama-era regulations which had made it more difficult for people with severe mental illnesses to buy guns. Not to mention the tweet seemed to blame the victims of the shooting themselves for the tragic event by implying that they did not act quickly enough when his "erratic behavior" was reported.

Trump drew criticism again with another tweet sent on Saturday morning in which he said, "Very sad that the FBI missed all of the many signals sent out by the Florida school shooter. This is not acceptable. They are spending too much time trying to prove Russian collusion with the Trump campaign — there is no collusion. Get back to the basics and make us all proud!" This tweet seems to blame the FBI for the shooting as well as making a very weird pivot to himself and his own trouble with Russia.

But in his segment, Oliver left the skewering of Trump to the actual victims, showing heartbreaking and somehow heartening clips of their responses. In response to lawmakers saying it's not the time to talk about gun control, Oliver pointed out that the actual survivors of the shooting are saying "Yes it f*cking is." Oliver commended the students for challenging adults to make a real difference in combatting gun violence. But their response to the tragedy wasn't the only response Oliver noted in his segment.

Oliver then showed a CNN segment in which political commentator Andre Bauer made the argument that today's gun-happy culture was to blame for the shooting, and not the guns themselves. He also made the claim that back in his day, kids were watching The Andy Griffith Show and there were no school shootings and there was still prayer in school, and they drove to school with guns in the actual car. To this, Oliver, how shall I say it, called BS. Of the segment, he said there were "so many things wrong," not least of which being that Bauer was born in 1969, a year after Andy Griffith went off the air.

And to cap it all off, Oliver let Griffith himself take the mic, showing a clip of the show in which his character (a sheriff who didn't carry a gun) said this about guns:

When a man carries a gun all the time, the respect he thinks he's getting might really be fear. So I don't carry a gun because I don't want the people of Mayberry to fear a gun, I'd rather they would respect me.

Sometimes Oliver doesn't even need to make the point himself — he can just let the evidence speak for itself.