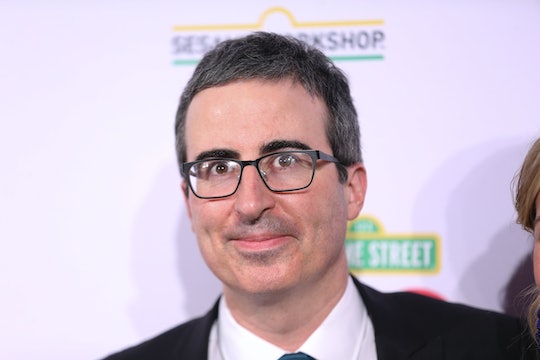 You know when you see a dad who gets a little weepy over a moment, like a graduation or a wedding or something, and then they kind of laugh at themselves afterwards like Oh well, what are you going to do? Those moments are truly precious, and Last Week Tonight's John Oliver's emotional reaction to his first vote in the U.S. is one of those great dad moments. He didn't get emotional as a political commentator, mind you. As Oliver explained in an interview on The Late Show with Stephen Colbert, it was casting his ballot as an American citizen for the first time that saw him "nearly burst into tears."

Oliver is a dad of two sons with wife Kate Norley, one who is 5 years old and the other is just 2 years old. The Emmy-winning host of HBO's Last Week Tonight, who was born in the United Kingdom, recently had the chance to vote for the first time ever in the 2020 presidential election. And as he explained to fellow talk show host Colbert, it was a surprisingly emotional experience he had been waiting to feel since receiving his citizenship status last December.

"So, standing in line, I thought maybe this will be it — and I didn’t feel it. Giving them my name and getting the ballots, I didn’t feel it. Scanning it into the machine and the machine saying your vote has been counted, I nearly burst into tears. That is the truth. My eyes got misty and I thought, I don’t know if I can cry in a voting station," Oliver shared.

Oliver has been an incredibly vocal critic of President Donald Trump throughout his time in the White House, and he chose to make not one but two take downs of the president's coronavirus response with his Sunday night episode of Last Week Tonight. To be able to finally cast his vote as a citizen of the United States was clearly a real moment for him in that polling booth... although he did tell Colbert that, as a voter in New York state, he "didn’t want to wait for the machine to say, ‘Your vote has been counted. Asterisk: you live in New York, so it’s counted significantly less.'"

The father of two's misty-eyed reaction to voting isn't the first time he admitted to being an emotional guy; in 2018 he told People that his oldest son was about to start preschool and he figured the famous British stiff upper lip might fail him, "It’s going to be incredible. As a British person, I don’t really have a middle ground — it’s either no emotion at all or I’m collapsing in tears. So it will probably be the second one."

Everyone is understandably emotional on Election Day this year, but knowing that John Oliver struggled to stop himself from crying in the polling booth is oddly comforting. Because nothing brings out the best in people like a dad who is comfortable showing emotion.