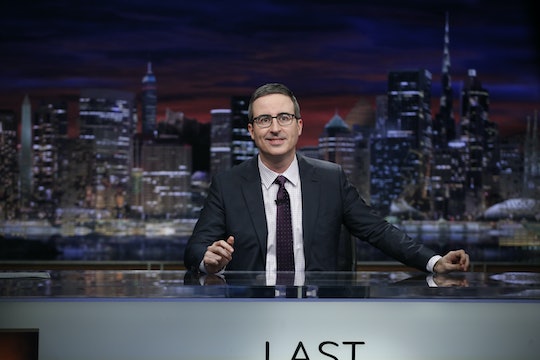 After a brilliant fake-out promising his main story was about pornography — a product some people think should be available without stigma, some people think is fine in certain situations, and others think should be banned completely — John Oliver's segment about crisis pregnancy centers (CPCs) on Last Week Tonight revealed that the actual subject he was discussing was abortions. Namely, he tackled the ways in which crisis pregnancy centers, or faith-based facilities where women are essentially dissuaded from having abortions, mislead pregnant women in need.

While abortion clinics all over the country are closing en masse, especially in low-income rural areas where comprehensive sex ed, access to contraception, and stigma are a struggle, crisis pregnancy centers proliferate. The ratio of CPCs to abortion providers in the U.S., according to the segment, is 2751 to 1671. Oliver also points out that in some states, the ratio is even worse, like in the state of Mississippi, where there is one abortion provider and 38 CPCs.

He admits that organizations which try and talk pregnant women out of having abortions have every right to exist and open up shop. But the problem is that, on the outside, CPCs make an active effort to obscure their motives, presenting themselves instead as unbiased health clinics where women might be able to procure an abortion. They even have neutral, healthcare clinic-sounding names, like Sunrise Women's Clinic and Center for Pregnancy Choices, in spite of the fact that some of them aren't even licensed and don't provide medical services.

And lest you think that there's some plausible deniability for CPCs dressing themselves up as places that may provide abortions, Oliver plays audio of an anti-abortion activist speaking at one of the nation's largest CPC conferences. She explicitly states, "The best client you ever get is one that thinks they're walking into an abortion clinic, okay?"

Another disturbing aspect of CPCs is that they function like brick-and-mortar (and mobile) anti-abortion protestors who shame and heckle women as they try to walk into an abortion clinic. CPCs will frequently open next door to abortion clinics or park mobile centers in front of them to try and lure women away from their intended destination. Once inside the CPC, women can be emotionally manipulated with ultrasounds altered by cutesy "messages" written from the "baby," maternal language, and misinformation about the supposed medical and psychological risks associated with abortion.

One doctor revealed that a woman came to her in her third trimester asking for an abortion because the CPC she initially visited early on in her pregnancy told her she had time to make a decision since her state allowed third trimester abortions — which was, of course, false. Another CPC's training manual instructed employees to advise women that various forms of birth control weren't really effective and shouldn't bother to be procured. Plus, because many CPCs don't meet the requirements of a healthcare facility, they're not actually regulated as such, despite them being government-funded in 16 states.

And, of course, CPCs only offer assistance like maternity clothes, free diapers, free pregnancy tests, and free ultrasounds to women for a very short time before cutting them off to resources. To this, Oliver astutely replied:

Wow. So the basic argument there is, "We're just not in a position where we can take care of a baby forever. We don't have the time or the resources, so we're choosing not to make that commitment right now," to which I would say, yeah! Exactly.

The segment ended with Oliver demonstrating how easy it was to obtain the paperwork for and build a tax-exempt, mobile CPC of his own (modeled after his church, Our Lady of Perpetual Exemption), complete with an ultrasound machine which didn't even require a licensed technician to be using it. It was a chilling way to bring the story full circle, but it proved his point. And hopefully by shedding light on this coercive practice, Oliver helps more women seek the care they actually need.