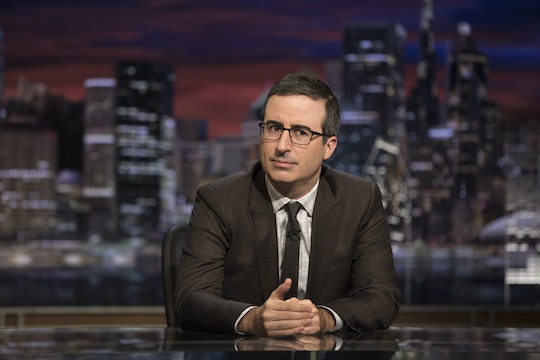 By now, parallels to former President Richard Nixon's Watergate scandal have become a staple of covering Donald Trump's presidency, if only because it's the last time such a single massive hot mess befell the White House. In the time of Trump, however, there are weekly massive hot messes, each of which can only be compared to Watergate in terms of impact (although they are far, far more frequent). It's why John Oliver's "Stupid Watergate" segment on Last Week Tonight was so perfect. Because Trump's many scandals are like Watergate in scope, but they always seem to be... significantly less intelligent, somehow.

He began by pointing out how Jeff Sessions essentially perjured himself during his Senate confirmation hearings. In them, Sessions was asked by Senator Al Franken how he would handle it, as Attorney General, if news ever came out that members of the Trump campaign had communicated with the Russian government. Sessions answered by saying he had never met with Russian officials, which, you may have noticed, was not the question being asked. Of course, news came out this week that Sessions did have an undisclosed meeting with Russian ambassadors, which isn't technically illegal, except that he said under oath he never did it. He's since recused himself as Attorney General — the cabinet position he was being confirmed for, by the way — from anything having to do with Trump and Russia.

Add to that the fact that Trump campaign advisors JD Gordon, Carter Page, Jared Kushner, and Trump's former campaign manager Paul Manafort have all been suspiciously squirrelly when asked questions about whether they've met with Russian officials, only for news to come out that they've met with Russian officials (which, again, is only shady because they keep lying about it), and we have all the makings of a ludicrous scandal.

As Oliver put it:

It is not clear what is going on here yet, although one possibility is that this all amounts to what I'm going to call Stupid Watergate: a potential scandal with all the intrigue of Watergate except everyone involved is really bad at everything. And the relevant question isn't so much 'What did the president know and when did he know it?' as it is 'Is the president physically capable of knowing things at all?'

He then pivoted to Trump's attempt to distract from Stupid Watergate by accusing President Obama of wiretapping him at Trump Tower, which is... elaborate. Basically, Trump White House scandals are so intense and so frequent that he's even taken the fun out of those. Apparently, nothing is sacred anymore, but at least we have John Oliver to dutifully report on the glowing embers of our executive garbage fire.