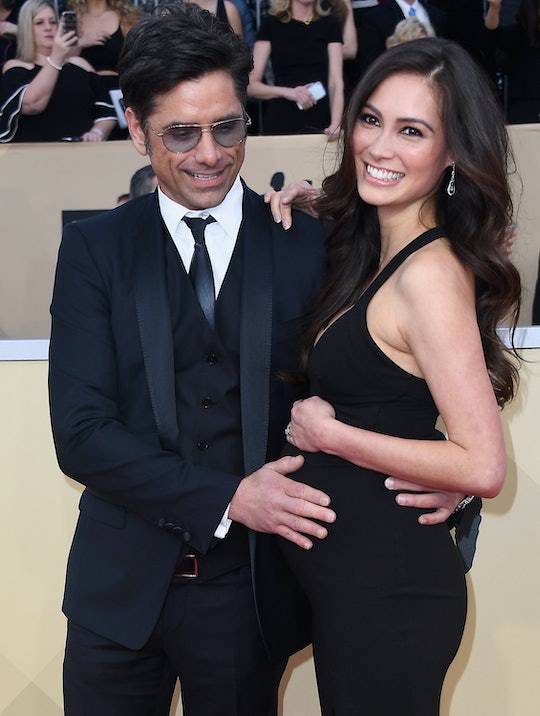 Have mercy! One of Hollywood's silver foxes is about to welcome his first child and in a recent interview, John Stamos said becoming a dad for the first time is making him "so emotional" and "so excited," according to People. Yes, the 54-year-old star of Full House, and Fuller House, will soon become a dad and he recently reflected on just how excited he is for this next milestone in his life.

"I've waited my whole life for this," Stamos told Entertainment Tonight At the premiere of his long-time costar Bob Saget's new movie, Benjamin, on Wednesday, according to People. "I just can't. I'm already so emotional and so excited… I've been dreaming about our baby. I mean, I am really excited."

Stamos and his wife, Caitlin McHugh, got married in February, after announcing that they're expecting their first child back in December, according to E! News. The happy couple is obviously excited for their bundle of joy to arrive, and Stamos himself has spoken about the new family's little joy many times now. After all, the actor played Uncle Jesse on Full House for years, so his iconic role has certainly helped prepare him for this next adventure.

All in all, it's clear that Stamos is so thrilled to be raising a child with his wife. Speaking to Us Weekly this week, he said:

My whole life I’ve waited for this moment and the best part is I’m getting to parent with the most perfect woman. She's just humble and sweet … I have to watch her because it takes her thirty seconds to win somebody over. She's a really special person.

Even Stamos' friend and costar, Saget, echoed those sentiments to Us Weekly. "He's always wanted to be a dad, always," he said at the premiere on Wednesday.

Another one of Stamos' costars from his Full House days was also at the premiere on Wednesday, Candace Cameron Bure, and she also confirmed the fact that Stamos is more than ready to become a dad now. "He will be amazing," she told Us Weekly. "He's always great with all of the babies he's worked with and kids and nieces and nephews and our kids and all the kids on the show. He's going to be a great dad. We've all been looking forward to this for a long time for him."

Based off of his friends' comments alone, it's obvious that Stamos is totally ready for fatherhood, and his admission that it's such an "emotional" time for him is both sweet and so relatable for many new parents. Although he's long been a TV star and has a net worth that could probably buy him anything he'd ever want, becoming a parent is a priceless time in someone's life and Stamos is so clearly looking forward to it. "I've done everything anyone could ever… I've had the most beautiful blessed life on the planet, and the most honest real thing I could do I haven’t done," he said, according to People.

Stamos' baby will be here before he knows it and hopefully he'll keep everyone up to date on how fatherhood is treating him IRL.