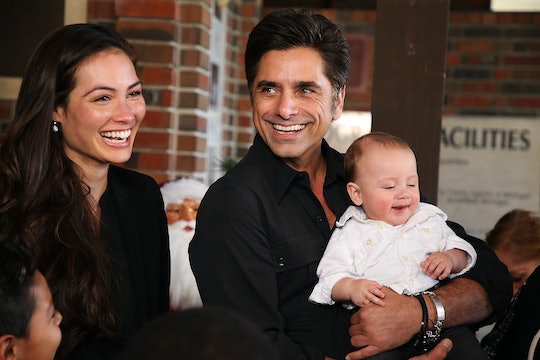 Is it possible that more than a year has passed since everyone's favorite hot uncle became a dad? Since then, the beloved Uncle Jesse has been sharing updates about his fatherhood experience and in between sharing adorable photos of his baby boy on Instagram, John Stamos also revealed his son Billy's first words recently. As it turns out, little Billy chose an opportune moment to speak up in front of a crowd and the Fuller House star couldn't resist the chance to make a joke out of the boy's first words.

Stamos and wife Caitlin McHugh welcomed their first child together, William "Billy" Christopher last April. The birth was a bit frightening, as Billy came a bit prematurely. "He wasn’t fully baked, so that was very scary in the beginning," McHugh told People at the time. "He was very, very small ... fragile, little. Every time (he) fell asleep, you’re like, ‘Please wake up.’ (We were) constantly checking to make sure he was still breathing."

Fortunately, Billy has gone on to do just fine and may even be stealing the stage from his dad. In fact, Billy did just that not too long ago while Stamos was on stage rehearsing for The Little Mermaid Live!, which airs tonight. Stamos plays Chef Louis, the eccentric French chef who attempts to cook up Ariel's crab friend Sebastian and was in character working on his performance when Billy butted in. "I'm rehearsing my number, kinda for the first time on stage — jumping on tables with knives and things — and all I could hear was 'Dada, Dada, Dada, Dada!'" Stamos told Entertainment Tonight on Monday.

But "dada" isn't all that Billy has been saying. "Trust fund were his first two words…" Stamos jokingly told the news outlet. "He does talk. He says, 'coco.' He wakes up in the morning saying 'coco' and then he says… Lilo is his dog. 'Lilo, Lilo! Coco, coco! Mama, mama!'"

Despite the hilariously adorable interruptions, Stamos has taken to fatherhood like a "natural," as McHugh told E! News last November. So much so, in fact, that it sounds like they may not be finished having kids just yet. Stamos told E! News that he and McHugh would like another baby, but their lifestyle isn't conducive to, umm, baby-making. “[Billy] keeps us busy, so we haven’t had time to do the thing you do to have another one,” Stamos told the news outlet. "But we’re gonna send him away. We’re gonna leave him here this afternoon. We’ll leave him with you."

Difficulty finding alone time with his wife aside, Stamos told People last June that fatherhood overall has been an emotional ride thus far. “It’s been beautiful,” he told the magazine. “Every second you pray that you can keep the kid alive. Every day is different, time has become very elusive, stuff just goes by so fast. It’s just beautiful. I’ve cried most days; I just stare at him.” Talk about parenting in a nutshell.

Regardless of if and when Stamos and McHugh continue to grow their family, they are in for many more hilarious and heartwarming moments with Billy. Luckily, I highly doubt anyone would mind if the little lad made an impromptu appearance in The Little Mermaid Live! I know I wouldn't.