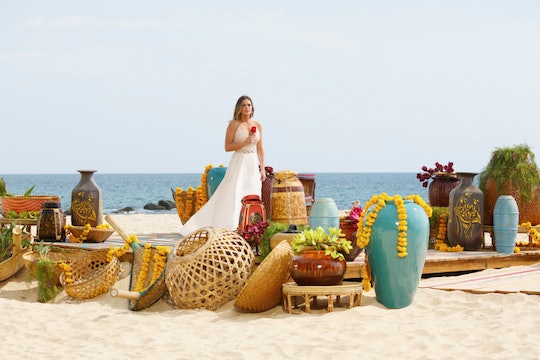 JoJo Picks Jordan On 'The Bachelorette' & It Was Super Emotional

It all came down to this. JoJo started with 26 men ready to fill the hole that Ben Higgins left last season of The Bachelor; through many football-themed challenges and meat plates, she made her decision. On Monday night's finale, JoJo revealed that she loved both of them – an affliction she knew well on the receiving end with Ben. In the end, though, JoJo was able to choose: JoJo picked Jordan on The Bachelorette, and it was really emotional.

JoJo, Jordan, and Robby traveled to Thailand to meet JoJo's family. She expressed worry about regretting her pick, no matter who it was. According to her, Jordan seemed like other guys she's been with – and who've broken her heart. When she's with him, she thinks of Robby...but when she's with Robby, she thinks of Jordan. It seemed like she wouldn't be able to pick!

Just kidding, of course she was. She picked Jordan. And Jordan picked her – she accepted his proposal and he accepted the final rose. And almost immediately after, they had wine glasses in their hand. They truly are on their way to the happily ever after JoJo was looking for.

This doesn't mean that the finale wasn't an emotional rollercoaster from start to finish. JoJo's family was Team Robby at first because he immediately asked for her hand, while Jordan didn't – which signaled to them that he wasn't ready for commitment. JoJo, however, was clearly Team Jordan and didn't care. Jordan also made the belated move and called JoJo's parents to ask for their permission to marry her.

Despite her Team Jordan stance, JoJo still expressed love for Robby too. Their breakup tore her up – until it was time for her and Jordan to get engaged. Tears were shed from both of them, but as soon as Robby exited, JoJo was getting geared up for the less-famous Rogers.

JoJo was able to whittle down 26 contestants down to one, and we were blessed to see it all unfold. But the momentum won't stop now that JoJo and Jordan are engaged, because now we can see how their relationship unfold. We can also get excited to see who will be our next Bachelor after JoJo broke his heart, for this cycle seems never-ending at this point. Until that happened, we can rest assured that this season of The Bachelorette was intense from start to finish.