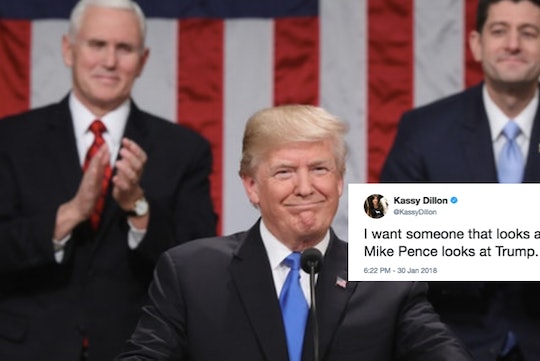 In order to distract themselves from the political theater on Tuesday night, so many people on social media consoled themselves by making jokes about Vice President Mike Pence's expressions at the State of the Union while he sat behind the president. And to be quite honest, they were hilarious.

Pence sat next to House Speaker Paul Ryan, as is customary, and clapped throughout the entire address. Of course, that makes him an easy target. It's not easy to have a camera on your face for that long during a speech by the president and not end up looking a little weird from time to time. It doesn't help that Pence is an easy target for some people.

His old-fashioned views about women, like that he won't dine alone with a woman without his wife present, and the dangerous positions he's taken when it comes to the LGBTQ community, like advocating for conversion therapy or closing health clinics in his home state of Indiana, make it all the more hilarious for some people to tease him.

Pence also defends Trump every chance he gets, even when the president might do things that should, theoretically, go against his Christian beliefs. All of these combined points means that, in Twitter's mind, Mike Pence is very much fair game.

For as many people who are opposed to Trump, there are just as many who worry about Pence. If anything, he's been able to push the administration to be more religious in their policies. So when the Department of Justice stands up for "religious rights," like allowing business owners to turn away LGBTQ couples or repeals Obama-era transgender civil rights and protections, or vows to appoint justices that will repeal a woman's right to choose what she does with her body, America has Pence to blame.

Richard Land, the president of the Southern Evangelical Seminary and one of Trump’s faith advisers, told The Atlantic in a feature on the vice president, "Mike Pence is the 24-karat-gold model of what we want in an evangelical politician. I don’t know anyone who’s more consistent in bringing his evangelical-Christian worldview to public policy.”

Despite being an evangelical Christian, Pence still manages to not just fight against gay people and a woman's right to have an abortion, but has also defended Trump's comments about there being "good people" in the white supremacists movement, the president's alleged comments about African countries and Haiti being "sh*tholes," (Romper's request for comment from the White House was not immediately returned), and has even walked out of an NFL football game when players protested police brutality and racism in law enforcement.

After Trump's comments about what happened in Charlottesville, where white supremacists marched with torches chanting that they "would not be replaced" by people of color, according to NBC News, Pence said:

Pence isn't in a tough spot — he put himself there, which might be why some people think his face looks like he smelled something foul. It might be his conscious when he defends some of the racist and sexist things that the president has allegedly said and done.

Bullying someone for how their face looks while enduring a long Trump speech is not exactly the kindest thing to be doing. But given that Pence is the vice president, with tons of power, and the people that the administration is hurting are so powerless, I hardly think it will do much harm. And plus, cameras do seem to always catch him looking like he's smelling something a bit funky.