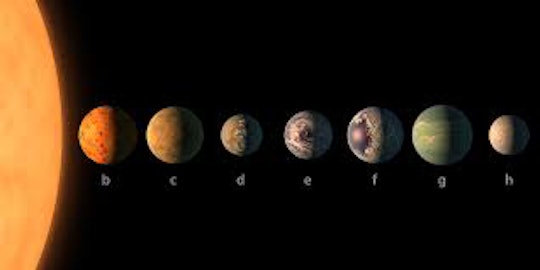 Jokes About The New Exoplanets Got Political

Ever thinking this whole living on planet Earth thing isn't all it's cracked up to be? Especially lately... I'm not going to point any fingers but you know who you are, Mr. Drumpf. Well, if you've been worried about the state of the world we live in, I might have some good news for you. Scientists have discovered seven Earth-sized exoplanets that could potentially sustain life within our own solar system. It's a monumental discovery, and naturally social media has taken the news with solemn gravity. Just kidding — here are some of the best jokes about the new exoplanets from the Twittersphere. So far, of course. Because they are coming in hot.

The planets were discovered by an international team of scientists who were studying a dwarf star called Trappist-1 about 40 light years away (or 235 trillion miles) from Earth. According to USA Today, Amaury Triaud, an astronomer from the University of Cambridge in the United Kingdom and co-author of the study (which was released in the scientific journal Nature) pointed out:

We’ve made a crucial step toward finding (out) if there is life out there. Here, if life managed to thrive and release gases similar to that (which) we have on Earth, we will know.

And with that potentially life-altering piece of news, came the jokes. Some jokes about the seven new planets orbiting a star were a little on-the-nose, if you know what I mean.

While others went political.

So... maybe quite a few went political while calling out newly minted President Donald Trump. Specifically, many mentioned his controversial travel ban on seven Muslim-majority countries.

It's all in good fun, right?

This is the first time in history scientists have discovered so many potentially habitable planets clustered so closely together in our solar system. As NASA astrophysicist Elisa Quintana told Nature:

To have this system of seven is really incredible. You can imagine how many nearby stars might harbor lots and lots of planets.

That being said (and of course, we are still super excited about the discovery), 40 light years is crazy far away. And the Twittersphere took note of the impossible distance.

Also on tap? A little extra-terrestrial fear and paranoia.

Astronomers will continue to research the seven exoplanets, three of which reportedly have the highest likelihood of sustaining water and human life. As Sara Seager, an astronomer from the Massachusetts Institute of Technology told The New York Times:

The Trappist-1 planets make the search for life in the galaxy imminent. For the first time ever, we don’t have to speculate. We just have to wait and then make very careful observations and see what is in the atmospheres of the Trappist planets.

And with every new discovery they make, every piece of information they share, Twitter will be waiting for them. With jokes and perhaps a little hope and fear... but mostly jokes, I think.