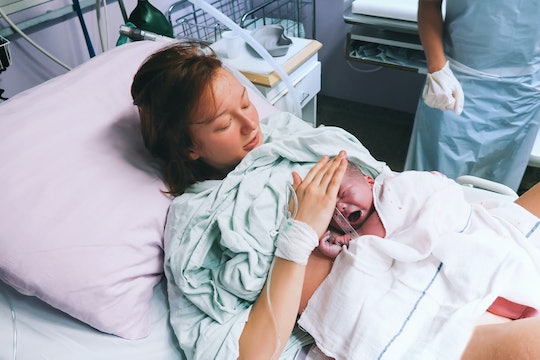 This Joke We Make Right After Birth Is Actually Freakin' Gross, So Let’s Stop Making It

A few weeks before I gave birth to my first child, my mom told me a story. After she gave birth to me, her doctor joked with my dad about "putting in an extra stitch" for him while sewing her up. She had just delivered vaginally, and she knew the joke meant one thing: a tighter fit for sex after the healing process. My mom was appalled. “I couldn’t believe your father let the doctor say that in front of me,” she said. Sadly, my mom isn't the only person who's told me she's heard this joke. The "extra stitch for daddy," or "daddy stitch," joke is awful, and we need to stop making it.

There is always truth in comedy, and I'm sorry to say that the "daddy stitch" is not an urban legend. It's commonly called “the husband stitch" and was originally conceptualized in the 1950s as a way to “tighten things up” after repairing episiotomies, which were routine back then. Dr. Robert Barbieri, chair of obstetrics and gynecology at Brigham and Women's Hospital in Boston, told the Huffington Post, “What they thought is that if they did a routine episiotomy, they’d have a chance to repair it and that during the repair, they could actually create a better perineum than if they hadn’t done it. The idea [was] that we could ‘tighten things up.'"

In fact, the extra stitch would most likely do the opposite of the intended effect: make having postpartum sex a woman’s worst nightmare.

In some cases, women reportedly were given a "daddy stitch" without their consent. The American Congress of Obstetricians and Gynecologists (ACOG) do not recommend routine episiotomies and, in a comment to Romper about the procedure, reported that use of episiotomy has significantly decreased among all deliveries — from 60.9 percent in 1979 to 24.5 percent in 2004 — with a similar decrease in episiotomy rates with operative vaginal delivery. While in decline in practice, the joke about “improving” a woman’s post-birth vagina for the sake of her husband's pleasure is still alive and well — and it's obnoxious and wrong.

My mother still talks about the "daddy stitch" joke as a sore spot in her new motherhood experience. I ended up with a c-section during the birth of my daughter, and wasn't exposed to the truth of the joke personally. If I had been, especially after knowing how it hurt my mom, I'm not sure what I would have said. But it still comes up in the delivery room, and I have friends who heard it there. Even if the procedure isn't common anymore, women are still subjected to this crap in the moments after giving birth, and we need to cut it out of the conversation permanently.

By joking about the "daddy stitch," we're essentially objectifying a woman at a moment that should be reserved exclusively for her, when she should be respected and revered for the incredible feat she just accomplished. Joking about how “tight” she is for the sake of her husband's pleasure is completely inappropriate. In a country currently waging war over reproductive rights, it's worryingly dehumanizing. To be clear: It's inappropriate to joke about women being service stations for male sexual pleasure. I'm not sure why we're still having to state that in 2017, but here we are.

That doctor who joked with my dad in front of my young and probably terrified mom was completely unprofessional. But anyone who makes that joke — whether it's a partner, friends, or other women — is doing harm. Even if it’s meant in jest, by joking about how tight women's vaginas should be after birth, we're degrading and dishonoring mother's bodies and putting pressure on them in the vulnerable postpartum period that they don't deserve.

Pregnancy and childbirth change a woman's body. But weight gain, saggy boobs, or a postpartum vagina don't dictate a woman’s desirability, and shouldn't be a priority for her partner. In the moments after birth, sexual pleasure and attractiveness — especially for someone else’s benefit — are the furthest things from a brand-new mom's mind. So why should it be on anyone else’s mind?

All this aside, the idea that one could “tighten” the vagina by adding an extra stitch isn't founded in actual science. The actual vaginal canal can’t be physically minimized by adding an extra external suture — that kind of surgery only tightens the vaginal opening. In fact, the extra stitch would most likely do the opposite of the intended effect: make having postpartum sex a woman’s worst nightmare. So the logical premise underlying the joke doesn't even hold up.

Unless you really want to piss off a new mom, don't make this joke. It’s rude, damaging, and it will make you look like an cave man. Men, doctors, humans of the world: Delete this joke from your repertoire.