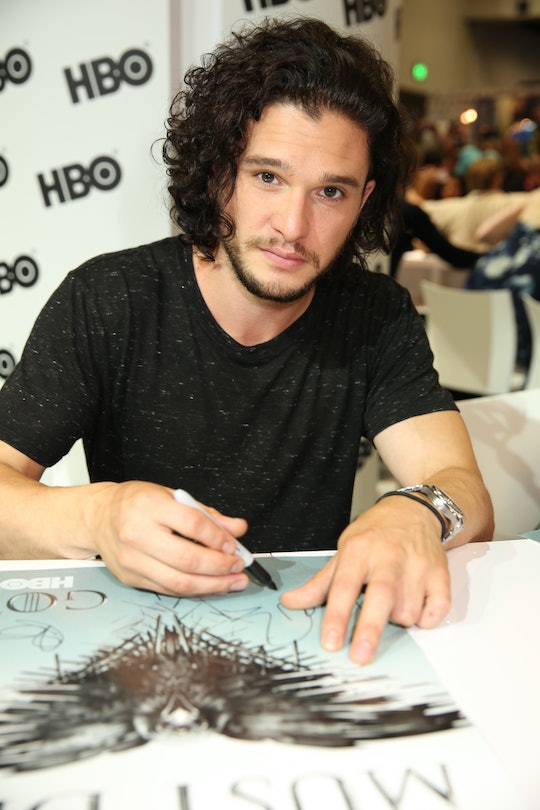 Jon Snow Is Dead, According To HBO, But Are The 'Game Of Thrones' Showrunners Bluffing?

Don't kill the messenger; I've got some potentially heartbreaking news for you, guys. According to showrunners at HBO, Jon Snow is dead. The official Game of Thrones Season 6 premiere episode title is "The Red Woman", which airs on April 24, hit press outlets today, notably containing a blunt confirmation which simply read, "Jon Snow is dead. Daenerys meets a strong man. Cersei sees her daughter again."

Kit Harrington, the actor who plays the unbelievably beloved Lord Commander of the Night's Watch, Jon Snow, has repeatedly confirmed that his character is, indeed dead. He has told everyone who will listen that Jon Snow is dead. According to MTV, Harrington recently appeared on the British talk show The Johnathan Ross Show and confirmed Jon Snow's death (he even took a tongue-in-cheek lie detector test, where Johnathan Ross doled out electrical shocks to make sure Harrington was telling the truth).

"I won’t tell you how many episodes I’m lying dead, but it’s enough that I was out there for quite a while,” he told the audience, adding that it would be “so satisfying when you see it and you realize that I was telling the truth the whole time.”

Other cast members have been equally vehement about Jon Snow's violent death in the Game of Thrones Season 5 final episode, "Mother's Mercy."

For any of you who might have been in a medically-induced coma or drifting above the earth in a space shuttle, let me catch you up real quick here. Jon Snow had just gotten the job of his dreams. He was elected the Lord Commander of the Night's Watch (a job he wanted despite the fact that "no sex ever" was literally part of the job description). He was trying to unite the Free Folk and the Night's Watch and save the Seven Kindoms from the Whitewalkers. Then his steward Ollie, who I will never, ever forgive until my dying day, betrayed Jon and brought him out to the courtyard to be stabbed to "death" by members of his own Night's Watch, Julius Caeser-style. The season ended with Jon lying in a spreading pool of his own blood, clearly dying.

Now HBO is officially telling us that yes, he is definitely dead, no backsies.

Except I'm not buying it.

Well, I am buying that he is "dead", but I think he is just mostly dead (pause to enjoy The Princess Bride reference if you will). There are subtle clues all hard core Game of Thrones fans have been noticing. If you watch this Season 6 trailer closely, you might notice a certain familiar looking warrior riding into battle.

Another clue might be the title of the first episode of Season 6, "The Red Woman." Melisandre is a high priestess with magical powers bestowed upon her by the Lord of Light, right? Does anyone remember Beric Dondarrion, the warrior who was brought back to life many times by Thoros of Myr, a priest in the service of the Lord of Light? He was mostly dead plenty of times, and yet he is supposedly slated to appear in Season 6 of Game of Thrones.

I know the Game of Thrones writers love to get us attached to characters and then kill them off, but I am hoping this time they might give us a break. Maybe they will show us a little humanity and let him live.

So now I guess we'll have to wait to find out if Jon Snow is "dead" or dead. And if it turns out he's dead for real... then what?