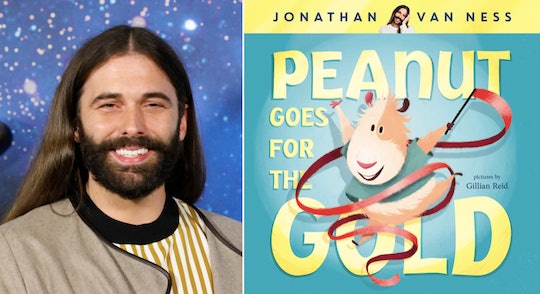 Jonathan Van Ness has been very open about his struggles with self-acceptance as a young kid and his journey to self-love. He's discussed as much on Netflix's Queer Eye, on his podcast Getting Curious, and with his followers on social media. Now Van Ness has written a children's book that encourages kids to celebrate all of the things that make them special. How does he plan to do that, you ask? Why with a sweet story about a nonbinary guinea pig who is a rhythmic gymnastics prodigy, of course.

On Tuesday, the Queer Eye star hair stylist announced in a statement to People that he's written a new book for children called Peanut Goes For Gold, which is illustrated by Gillian Reid and will be released at the end of March by Harper Collins. The publisher describes the book as "a charming, funny, and heartfelt picture book that follows the adventures of Peanut, a gender nonbinary guinea pig who does everything with their own personal flare."

Peanut the guinea pig has decided to take on the world of rhythmic gymnastics with their own special twist on things, and young readers can expect a story that inspires them to boldly love themselves exactly as they are. As Harper Collins' description notes, "This upbeat and hilarious picture book, inspired by Jonathan's own childhood guinea pig, encourages children to not just be themselves ― but to boldly and unapologetically love being themselves."

Harper Collins executive editor David Linker told People that Van Ness is exactly the right person to share a message of self-acceptance and inclusivity with children. "Just like Peanut, Jonathan embodies the idea that no dream is impossible when you put your whole heart into it," Linker told the magazine, "and I’m so thrilled to have had the opportunity to help Jonathan translate that spirit into his amazing first-ever book for kids."

Of course, this isn't Van Ness' first book. His New York Times bestselling memoir Over The Top: A Raw Journey To Self-Love was released in September. In this memoir, Van Ness was as vulnerable and kind and real as his millions of fans have come to expect, detailing his early days as a gymnast that presumably acted as inspiration for Peanut's own journey and the long road he took to really, truly learn to love himself.

Parents and caregivers who want their children to believe in themselves and celebrate their own differences will hopefully find a lot to love in Peanut Goes For The Gold when it comes out this spring. Because at the end of the day, who doesn't want their kids to love themselves and go for the gold, just like sweet Peanut?