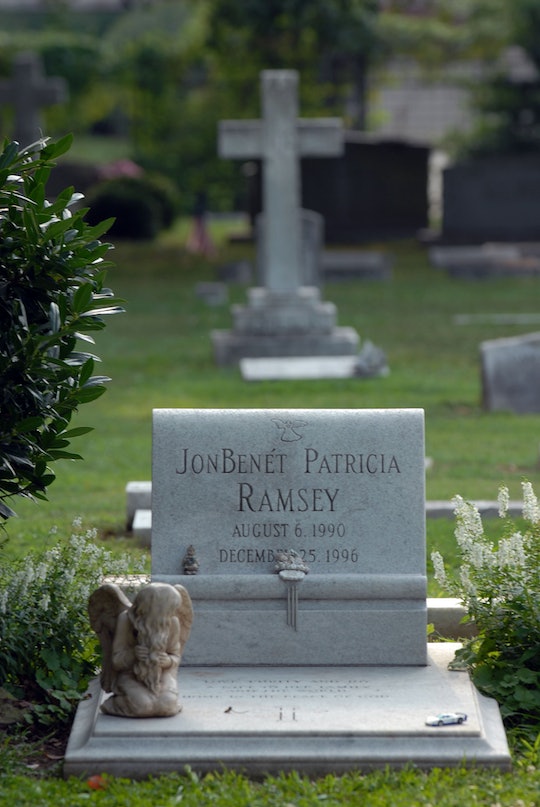 JonBenet Ramsey Crime Scene Photos Are Out There, & Here's Why You Shouldn't Look

How strange it feels to be revisiting the case of JonBenét Ramsey, the little girl who was killed in her home 20 years ago. I was younger back then (obviously), and I can remember standing in the line-up at the grocery store looking at the dozens of magazine covers with her little smiling face plastered all over them. My mom would always gasp and cover her mouth, then quickly leaf through to the article about JonBenét Ramsey for any updates. While it might be tempting to obsess over the unsolved case, maybe we shouldn't look for the JonBenét Ramsey crime scene photos this time around. Because we live in a different time, and you know they are going to be everywhere.

JonBenét Ramsey was just 6 years old in 1996. She was a beauty pageant queen, the youngest child of John and Patricia "Patsy" Ramsey. She lived with her parents and older brother Burke (who was 9 years old at the time of her murder) in an affluent neighborhood in Boulder, Colorado. On Dec. 26, Patsy Ramsey found a ransom note on her kitchen stairs telling her that JonBenét had been kidnapped. Within hours of the discovery of that note, JonBenét's lifeless body was found in the basement of the family's home. She had been strangled to death with a white cord.

Two entire decades have passed since that night. Two decades in which JonBenét would have gone to high school, maybe moved on to college. And still, the mystery of her murder has not been solved. Hopefully, all that might be about to change.

On Sept. 18, CBS will launch The Case Of: JonBenét Ramsey, a six part docu-series where the original investigators will be joined by new experts to attempt to solve her murder. Which naturally means people are getting pretty riled up about the case, especially those people who weren't alive or weren't old enough to remember it the first time around. Also, as human beings we are naturally fascinated with the unknown, with cases that have been left unsolved or questions that remain unanswered. It is a perfectly normal human response, right?

But here's where things get sticky: That little girl was a person. She walked in the tall grass just like the rest of us. She had her favorite foods like the rest of us, her friends and her laughter and her whole life to look forward to. She was too young to die, and there is simply nothing we can do about that now.

Here is what we can do; we can preserve her dignity. We don't have to look up her crime scene photos, because let's be honest; does anyone actually feel good about themselves when they do that? We can watch the show and follow along with the investigative team and root for them to solve the case.

And then we can resist temptation. We can avoid looking up her crime scene photos, because she was a little girl who deserved better. And now, that's all we can really do for her.