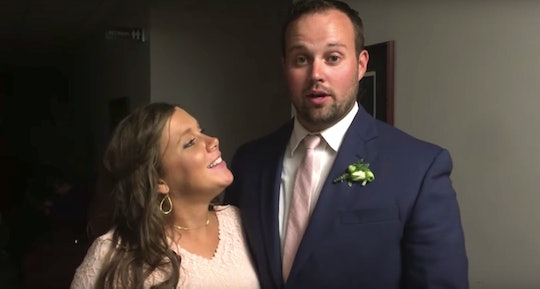 Josh Duggar Is Back On Social Media, But Fans Think Maybe He Never Left

It's been about five years since the eldest Duggar sibling was last active on his Facebook page, but as of Saturday, that's all changed... or has it? Josh Duggar is back on social media, but fans think he might have never left. After being ousted in 2013 for a succession of scandals he decided to take a step back from the internet. As of May 26, however, he has officially returned.

In Touch Weekly reported that fans noticed Josh's official Facebook page had been updated for the first time with a new profile photo of his son, Michael. The last time he was active on the page was back at the end of 2013, when he uploaded a new cover photo and shared an article about "building stronger families and safer communities." It seems that his return coincides with him beginning a GoFundMe page for JimBob and Michelle's friends Dylan and Dianna Fleshman, whose baby was in an accident last week.

However, not all is as it seems: fans running a Duggar family news page claims that Josh may have been using the alias "Janie Williams" online. Fans came up with the alias theory because when the GoFundMe page was first posted earlier this week, the name "Janie" was listed as having started the campaign, but when fans clicked on Janie's profile, it redirected to Josh's.

The post claimed that, given Josh's tense history with fans, it seems logical that he could have adopted a moniker to stay online during his supposed hiatus. However, some are wondering what else Josh been up to, if not only starting fundraisers under pseudonyms? The original post explained:

It seems Josh dropped his Joe Smithson alias and is now the mysterious "Janie Williams". Both names are listed on the gofundme as running the campaign. When I click on Janie's name it led me to Josh's profile. I can see Josh using the common name Janie/Joe and common last name Williams/Smith to try to hide. Smithson was a cute embellishment of the name Smith. I see no Janie Williams listed as a friend on Josh's page or the Fleshman's page and they both list lots of friends. Why another alias for Josh if it is him? What is he sneaking around doing now besides starting fundraisers?

Now, the Fleshman's GoFundMe page says it was started by John-David Duggar. Those who are familiar with the family will know that it's an interesting choice, given that John-David doesn't have any social media accounts, due to a rule that says the young adults can't have social media until they are engaged or married.

Fans of the show will remember that Josh's molestation and cheating allegations were not taken lightly, not by his family or the network. Us Weekly reported that Josh stepped down from his position at the Family Research Council, and 19 Kids and Counting was also pulled from the air. Josh posted his statement to the family's Facebook account:

Twelve years ago, as a young teenager, I acted inexcusably for which I am extremely sorry and deeply regret. I hurt others, including my family and close friends. I confessed this to my parents who took several steps to help me address the situation. We spoke with the authorities where I confessed my wrongdoing, and my parents arranged for me and those affected by my actions to receive counseling. I understood that if I continued down this wrong road that I would end up ruining my life.

He went onto say that he would "do anything to go back to those teen years and take different actions," that he had sought forgiveness, and that he is "so very thankful for God's grace, mercy and redemption." In the time since, Josh's wife Anna has said she forgives him (the couple is still together) as does his sister Jill, who was allegedly one of the young women he molested. She told People: "I had to make that choice to forgive him, you know? It wasn’t something that somebody forced, like, ‘Oh, you need to do this.’ You have to make that decision for yourself.”

It seems that Josh is slowly re-entering the public sphere, likely wary that forgiveness may not come as readily from fans as it did from family. Regardless, he's back on Facebook at the very least, and it likely means he's taking yet another step in moving forward with his life.