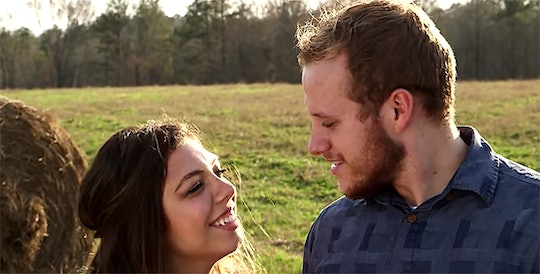 Ever since Josiah Duggar announced his engagement to Lauren Swanson in March, Counting On viewers have expressed a lot of interest in his fiancée's life. From questions about Swanson's parents to whether she subscribes to the Duggar's strict dating rules, there are many things people want to know about Josiah's wife-to-be. And given all the fan curiosity, it's really no surprise that Josiah Duggar's Easter photo with Lauren Swanson is generating a lot of commentary. What is a bit shocking, however, is what has fans in such a frenzy. Apparently, some people are blown away that Swanson wore a seemingly form-fitting dress — a rarity in Duggarland.

If you know anything about Josiah's mom, Michelle Duggar, it's probably that she's not a fan of so-called revealing clothing. In fact, Michelle teaches her kids that they should be "covered" from the neck all the way down to the knees. "Our interpretation was that from the neck down to the knee should be covered," Michelle wrote in a blog post on the topic of modesty, according to TLC. "By keeping those private areas covered, there's not any "defrauding" going on. My kids are taught the definition of defrauding as stirring up desires that cannot be righteously fulfilled. We don't believe in defrauding others by the way we dress."

So, did Swanson take it upon herself to "defraud" Josiah's Instagram followers on Easter? Although the answer is a big no (she adhered to the neck-down-to-the-knee coverage rule), fans couldn't help but point out how her dress strays from typical Duggar norms. Essentially, the floral ensemble Swanson donned for the holiday isn't as loose as the clothing her future sisters-in-law tend to prefer.

Following Josiah's message about celebrating "Resurrection Sunday" with Swanson, one particularly observant fan took the post's comments section, writing: "Love her dress unlike some the girls wear this is lovely and does not look like a sack you have chosen very well @siduggar she is beautiful and I hope you are both very happy together for many yrs to come."

Many others agreed with the commenter.

"Can we praise God for that dress though!!! Come through okayyyy," someone gushed.

Another person chimed in: "Wow that is a beautiful dress! Happy Easter!"

"SHE LOOKS SO GOOD!" someone else said.

Although Swanson's dress might not seem like a big deal to the average person, it's understandable why people have so much to say about her outfit given the Duggar family's interesting take on women's clothing.

For instance, the Duggar ladies didn't sport pants for years — a rule Michelle came up with shortly after she got hitched to Jim Bob Duggar. Michelle told Jim Bob at the time, according to TLC: "I really should be defining who I am as a woman by choosing to wear dresses and skirts."

Most recently, however, Jill and Jinger Duggar have broken the Duggar mold by choosing to wear pants. And if that bit of info isn't scandalous enough for you, wrap your mind around the fact that Jill got her nose pierced in November. Your mind is officially blown, right?

Of course, Michelle and Jim Bob's daughters didn't choose to be in this predicament of having their outfits and looks overanalyzed by fans. And as for Swanson in particular, she didn't grow up with cameras in her face like her future sisters-in-law did. Heck, Swanson doesn't even have her own Instagram account.

The point is, it's probably a bit overwhelming for the Duggar women (including Swanson) to have everything they wear analyzed — even if it's positive. Although there's absolutely nothing wrong with complimenting someone's outfit, commenting on someone's figure or comparing their body to another person might be taking it too far. Swanson, like any other person in this world, deserves to wear whatever she wants in peace.