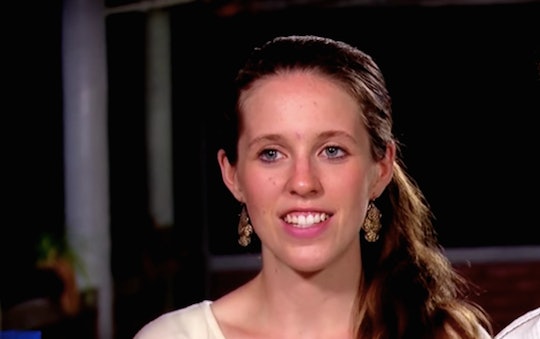 Out of all the Duggar daughters, Jill Duggar might be the most conservative and reserved. Not only is Duggar married to Derick Dillard, who is often under fire for tweeting transphobic comments, but she also closely adheres to Jim Bob and Michelle Duggar's strict teachings about what it means to be a "lady." Given that one of those controversial teachings is that women should only wear dresses, people were understandably stunned to learn that Jill Duggar recently wore pants in public for the first time. So, hold on to your trousers, Counting On fans — things just got real.

Over the weekend, Jill was spotted out in Arkansas wearing a pair of jeans, according to The Inquisitr. Yes, jeans. If you know anything about Jill, this is a huge deal. For close to 10 years (can you believe the Duggar brood has been on television for this long?) viewers have only seen Jill in long skirts and dresses. For diehard fans or spectators of the show, it's almost inconceivable to imagine Jill in anything other than a maxi skirt. Most of all, the incident is shocking because it defies the ultra-conservative beliefs of her parents — Michelle and Jim Bob don't allow their daughters to wear pants for religious reasons.

So, one has to wonder why Jill is suddenly sporting pants, even though it's really no one's business. I can't imagine Dillard encouraged Jill to don the jeans, but he's a wild card and he also appears to enjoy trolling fans. You never know. Either way, fans are absolutely floored.

Fans said of pants-gate, according to the comments on the Facebook page Duggar Family News: Life is not all pickles and hairspray:

Of all the girls (other than Jing), I never expected it would be Jill to have on pants.

They can't be pants.. on Jill??! Maybe Jinger convinced her they are two leg skirts.

I never in a trillion years thought I'd see Jilly Muffin in pants!

Jim Bob must be beside himself! His claim that the girls chose to wear skirts is becoming less credible with every daughter that wears pants. The armor is starting to crack.

What the what?! I have no words. She’s the one that I never in my wildest dreams thought would wear pants and certainly not in public...

Yep, fans are shocked. Although it wasn't too surprising when Jinger Duggar started to wear pants shortly after marrying Jeremy Vuolo in November 2016 (she's definitely a free spirit of sorts), it's a tad astonishing that Jill would defy Jim Bob's dress code.

And the timing of her choice to wear the pants is also notable. This Saturday, TLC announced Dillard would no longer be featured on Counting On due to his transphobic remarks about Jazz Jennings, the transgender star of I Am Jazz. So I have a few of my own theories about the pants-wearing: It's possible that Dillard wanted to direct fans' attention somewhere else, or that this is Jill and Dillard's attempt to make themselves appear more secular with the public following the recent backlash. Or maybe I'm way off and Jill just felt like trying out jeans. Unless Jill speaks out on the topic, fans will never know. The only thing I'd put my money on is that Jim Bob is probably losing his marbles right now — that guy loves his prairie dresses.

Going forward, it will be interesting to see if Joy-Anna Duggar or Jessa Duggar follow their sisters' pants trend. I imagine it must be a big decision, even though it might seem a tad trivial to others. The Duggar women were brought up in a very insular environment (has anyone read Michelle's views on "modesty"?), which probably makes the decision to wear jeans or pants a very complex one. Hopefully fans will be more understanding as the Duggar women navigate life outside of Jim Bob and Michelle's compound, because coming into your own can be difficult and stressful process.