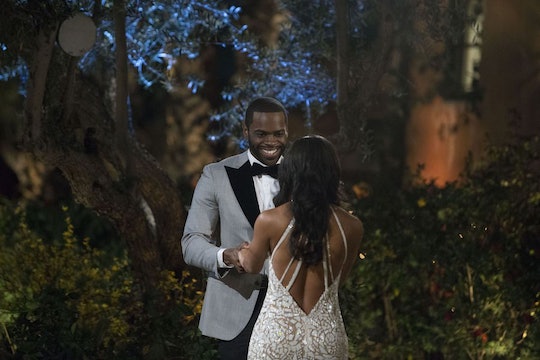 Josiah has been acting extremely cocky all season long on Rachel Lindsay's turn as the Bachelorette and in spite of the fact that they shared common ground as attorneys, he went the way of fellow attorney Jack Stone in Episode 6. He got cut right before the group moved from Oslo, Norway to Copenhagen, Denmark, which obviously came as a surprise to the overconfident suitor. But Josiah's comment about Rachel having poor judgement prove The Bachelorette contestant didn't deserve her.

Josiah was pretty salty about his supposedly unexpected departure, so much so that he started talking trash about not only the other guys, but Rachel, too. Josiah said in his exit interview:

Nobody in this house thought I was going home. Nobody. I came in here abundantly confident. I have no words to explain, to articulate her decision-making. It's just weird, dude, the people who she kept in the house over me. You think you can have a better chance with Matt than me? And I love Alex, the Soviet Union KGB spy, but you really think that KGB agent has something over me? And I love Adam, but you think a guy that brings a doll that looks like Mike Meyers is better than me? Woman, you have some poor judgement.

First of all, people had been complaining about Josiah's grating personality (pretty openly, in fact!) since the spelling bee competition, though he's been trying a little too hard all season. Even Rachel mentioned that she experienced him to be disingenuous sometimes. Compounded with the fact that he's been getting clownish edits for a few episodes, and it's definitely no surprise to anyone watching the show that he got sent home.

But Josiah immediately jumped to insults and competitive comparisons demonstrating how much "better" he was than the guys left behind when he got blindsided. He basically threw a temper tantrum over getting dumped, scapegoating Rachel's "poor judgement" instead of accepting her belief that they were incompatible. The whole monologue, following his earlier gushing praises of Rachel, was disappointingly reminiscent of guys who catcall women and then shout obscenities at them when they're ignored.

Luckily, he managed to contain his meltdown to the cameras instead of barging back into the cocktail party and saying any of this to Rachel. It was definitely one of the least graceful eliminations of the season and we'll probably have to see Josiah address his departure on the Men Tell All special.